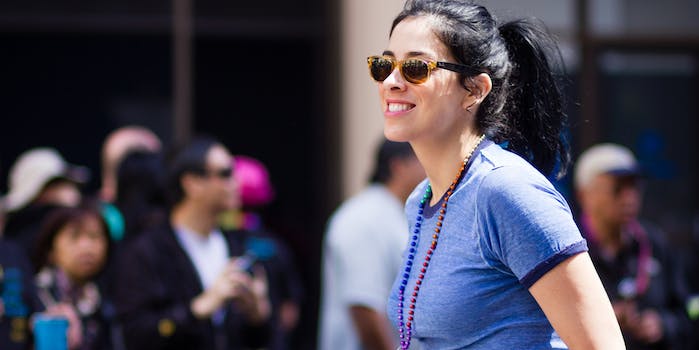 With Sarah Silverman’s help, transgender people have been made into a punch line once again. Last Wednesday, The National Women’s Law Center (NWLC) released a video for their new campaign, the Equal Payback Project, which seeks to raise awareness about the persistent gender pay gap between men and women in the U.S. The viral video, entitled “Sarah Silverman Closes The Gap,” features the comedienne jokingly proposing to “become a dude” through sex reassignment surgery in order to avoid the financial consequences of being a woman.

Several online media outlets lauded the video’s unique way of addressing the wage gap. E! Online called it video “humorous” and “thought provoking.” Bustle described the video as “hilarious,” including only a token disclaimer that “the financial struggles of transgender people are certainly no laughing matter.” Adweek described it as an “amusing video” and a “brilliant campaign.”

However, transgender people—who actually experience the social oppression and unemployment that often accompanies a gender transition — had drastically different reactions to the campaign ad. LGBT activists quickly took to Twitter to call out the ad for being transphobic:

.@nwlc @SarahKSilverman Sex reassignment doesn’t help one advance in workplace. Ask one of the most underemployed populations: trans people.

how dare you propagate such blatant transphobia in the name of feminism. garbage. not that i expected any better from you. @SarahKSilverman

@SarahKSilverman Wow, that’s funny. Because I got one in order to save my fucking life. Good thing we’re both laffin’! Ha! Ha!

Thx @SarahKSilverman for addressing wage gap but “sex change” won’t do it. You can be fired in 32 states just for being trans* #equalpayback

This isn’t the first time Sarah Silverman has made headlines for her provocative way of doing politics. Silverman has a long history of offending marginalized groups, even when she’s supposedly advocating for progressive causes. Here are three reasons why Sarah Silverman shouldn’t be the spokesperson for any campaign, let alone a feminist one.

Silverman’s ad for the NWLC makes the classic mistake of punching down at other marginalized groups while trying to punch up at the oppressor. By equating receiving a penis with being a man and calling the wage gap a “vagina tax,” Silverman reinforces the false and transphobic notion that vaginas define womanhood and penises define manhood. As one transgender man told Think Progress this week, “I do not need a penis to be a man.” The idea that surgery is required in order to truly be a man or a woman is an insult to the hundreds of thousands of trans people (and their allies) in the U.S. who do not define gender as genitalia.

But Silverman’s transphobic missteps go beyond her reduction of manhood to penis ownership. When Silverman totals up the wages lost for a full-time white woman working over the span of forty years, pronouncing it a “$500,000 vagina tax,” she leaves the even more devastating transgender tax unmentioned. According to the National Transgender Discrimination Survey conducted by the National LGBTQ Task Force, transgender people experience unemployment at twice the rate of the population as a whole with particularly high rates of unemployment among Black, Latino and multiracial trans people. Over a quarter of respondents were fired for being transgender. And those who were able to maintain their jobs suffered from lower income, barriers to promotion, and frequent workplace harassment including verbal abuse and physical assault.

So, no, Sarah Silverman, transitioning isn’t likely to help you earn back half a million dollars. It’s much more likely to cost you your job instead.

2. She overlooks issues of race and makes racist jokes

In the NWLC video, Silverman cites the wage gap between men and women, asserting that “we [women] typically make 78 cents to every dollar that a man makes.” Absent from this statistic, however, is the acknowledgment that women of color tend to earn much less than white women. In fact, if you scroll down far enough on the Equal Payback Website, NWLC does provide statistics showing that African American women make 64 cents to every white male dollar and Latina women make just 56 cents for every white male dollar. The 78 cent statistic is often cited by white women like Silverman with no acknowledgment of the fact that racist practices of employment discrimination against women of color play a large role in perpetuating the wage gap. It should be noted, too, that Silverman didn’t just recite this statistic, she worked on the script as well.

Silverman’s oversight might not come as a surprise considering her track record of racist humor. In 2010, she tweeted out a picture of herself in blackface with the caption “I’m having minstrel cramps,” a reference to the tradition of post-Civil War minstrel shows which negatively caricatured black people. Not only that, she also devoted an episode of her show The Sarah Silverman Program to blackface. Given the sensitive history of slavery, racism, and blackface in America, Silverman had absolutely no justification for performing in blackface outside of shock value. As Mark Sawyer, a professor of African American Studies at UCLA, observes, humor involving blackface is never acceptable.

“Blackface is one of the most pernicious and painful stereotypes about people of African descent,” Sawyer writes for CNN. “And it is always ugly, despite what those who put it on claim.”’

“Help us arm every young Black man in America,” comedians in the video pleaded. “That’s what you mean, right NRA?”

While “Black NRA” was produced with the collaboration of several African American comedians, it still hinges on the damaging stereotype of the inherently violent young Black man. In so doing, the video follows in the same tradition as the “ironic racism” of shows like 30 Rock which simply repeat obviously racist stereotypes as a form of humor. As Zeeshan Aleem said of 30 Rock on The Huffington Post: “Stereotypes can’t be used ironically if they aren’t subverted.” The same holds true for the subtle racism of the “Black NRA” video.

In 2010, Silverman came under fire on Twitter for repeatedly using the word “retarded” during her TED talk that year. The term “retarded,” as many cultural commentators and disability rights activists have pointed out, is an ableist slur that disparages people with intellectual disabilities. When asked about her use of the term, Silverman said that she has “a great love for retarded adults,” simultaneously professing her support for people with intellectual disabilities while also revealing that she had no idea what terminology would be appropriate to use: “Can I say retarded to mean retarded? I don’t even know what, mentally challenged adults?”

That same year, as a condition of her appearance during the Night of Too Many Stars program on Comedy Central, a benefit show for autism education, Silverman named a fake award after herself. She chose to call it the “Sarah Silverman Legends of Autism Award.” In light of the title, they joked that various “nominees” like former United Nations Secretary General Kofi Annan had autism, while also including Temple Grandin, an actual autistic activist and animal welfare advocate. While Silverman claims to have developed a personal relationship with Grandin, the joke still implicitly asks the audience to laugh at someone with an intellectual disability. And although the show raised a large sum of money for autism education, Silverman could have participated in the program without making autism itself the butt of a joke.

The next time a major women’s organization is looking for a celebrity to promote their cause, maybe they should look for someone who doesn’t repeatedly skirt the lines of decency under the guise of humor. Sarah Silverman has made a name for herself at the expense of marginalized minorities. And while she occasionally lends her voice to progressive causes, her tendency to offend causes more harm than it does good.

Photo via Charlie Nguyen/Flickr (CC BY 2.0)