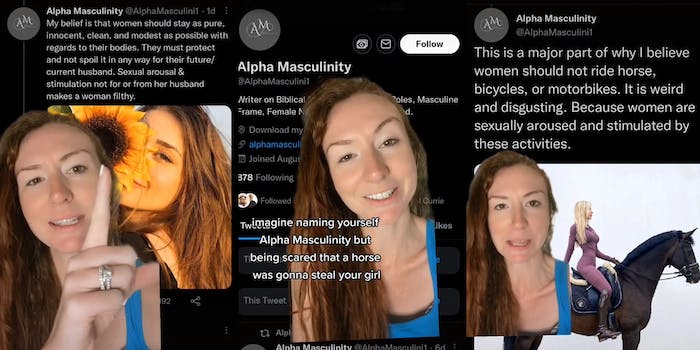 ‘Guess I’ve been riding my bike wrong!’: TikToker calls out man on Twitter who says women shouldn’t ride horses, bicycles, or motorbikes because they are ‘sexually arousing’

'Imagine naming yourself Alpha Masculinity but being scared that a horse was gonna steal your girl.'

A woman on TikTok calls out a man on Twitter for objectifying women for basic activities such as riding horses, bicycles, and motorbikes because, in his opinion, it is ‘sexually arousing’ for women.

On May 21, TikToker @aprilajoy posted a video of the man’s tweet thread with her commentary on the matter. She called out the Twitter user, saying, “imagine naming yourself Alpha Masculinity but being scared that a horse was gonna steal your girl.”

In the thread, the man perpetuates ideals of purity culture, tweeting, “sexual arousal & stimulation not for or from her husband makes a woman filthy.” He is paritcularly bothered by women riding horses and states that women are “sexually aroused by these acitivities.” He writes, “the horse is also very large, strong, muscled, powerful, and yes – packing. It acts as a sort of masculine figure women fall in love with and are sexually attracted to.”

Many commenters responded with humor to the ridiculous tweets. “So if it’s a female horse do they turn us into lesbians,” one viewer questioned.

“What exactly are these guys doing when they ride a horse?” another wrote.

Others were uncertain as to whether or not the tweet thread was intended to be satirical. “Please tell me that, that account is satire 😅,” one viewer said in the comments.

“I looked at his Twitter page for way too long thinking SURELY it is satire. but based on all I read, I’m 90% sure it’s real,” the video’s creator said in response.