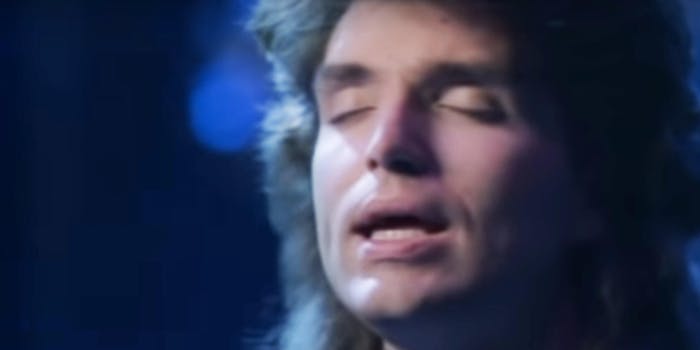 Some things to know about Richard Marx before we dig in here—yes, adult contemporary crooner Richard Marx, who is responsible for such hits of the ’80s and ’90s such as “Right Here Waiting,” “Now and Forever,” and “Endless Summer Nights.”

For one thing, Marx has been married to former MTV VJ Daisy Fuentes since 2015. And, just one year into marriage, the pair helped restrain a Korean Airlines passenger who became violent with the flight’s crew and other passengers. Also, Richard Marx will fuck you up if you say anything bad about him or his music online, as one Morning News columnist learned the hard way in 2013.

Which brings us to 2020. Early Wednesday morning, Marx tweeted a grammar lesson disguised as a political statement in the wake of Sen. Bernie Sanders’ devastating primary loss to Joe Biden in Michigan, Missouri, and Mississippi.

“I don’t care if you’re a Trumpkin or a Berner,” Marx wrote. “It’s 2020 and Google has been a thing for 22 years. If you still don’t know ‘your’ from ‘you’re’ it’s strictly because ‘you’re’ a willfully ignorant and stupid fuck.”

A little hostile right out of the gate? Perhaps! But given his candor, maybe like, don’t mess with Richard Marx? Unfortunately, some poor Twitter rando with 34 followers who self-describes himself as an “all-around nice guy,” didn’t pick up on Marx’s demeanor.

“What songs do you sing?” tweeted the user, to which Marx shot back two minutes later: “The ones your girl fucked to before she met you.”

Now, with everything else going on in the world, most of us probably didn’t expect to wake up this morning rallying around Richard Marx laying absolute savage waste to a dude trolling him on Twitter. But that’s exactly what happened.

Until now, Marx’s feistiness has been one of Twitter’s best-kept secrets, as Patton Oswalt pointed out just recently:

Honestly, we all should have known something was a bit off with the guy since his 1992 single “Hazard.” Did he … Was it Richard Marx who killed that poor Mary girl this whole time?? This all certainly makes you see things in a different light now.