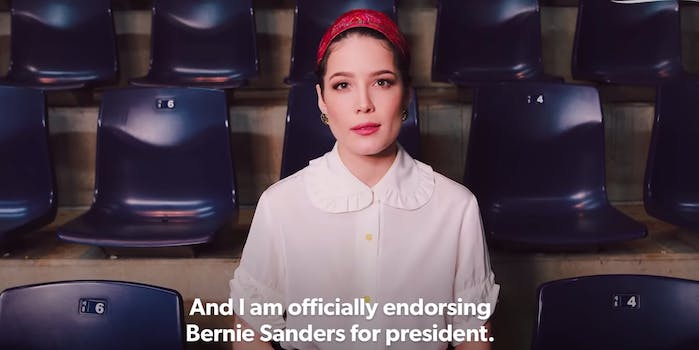 ‘We deserve a president like him’: Halsey endorses Bernie

The singer weighs in on the presidential race.

Halsey has become the most recent celebrity in a slew of high profile endorsements for presidential candidate Bernie Sanders (I-Vt.).

The singer-songwriter announced her endorsement on Tuesday in a video broadcast across Sanders’ social media accounts.

In the video, Halsey talks about how her background affected her decision to support Sanders. The 25-year-old performer touched on her identity as “a queer woman in a multiracial family, who was raised poor in an American suburb.”

She also went into detail about her past reliance on medical and financial assistance, getting an abortion and her experience dealing with endometriosis.

“Now I’m considered fortunate, lucky even then comparatively, to the rest of working-class America,” Halsey said. “And now my financial privilege protects me from the effects of marginalization that would have previously been fatal for me.”

Halsey tweeted that her 2020 endorsement is a “re-endorsement” of Sanders as she supported him in 2016, according to Billboard.

“Before I started making music there were always people in the music industry, or on Wall Street, or these hedge fund guys—anyone making a ton of money would always say, ‘Oh you’ll understand why I support X candidate whenever you start making millions of dollars,'” Halsey told Billboard. “I could make $10 billion, and there is no amount of money that is worth more to me than the protection of human rights and the protection of people who need it the most.”

Fans expressed their delight for Halsey’s endorsement, supporting her decision to speak out about her political views.

Celebrities touting their political views is nothing new. Sanders has racked up influential support among stars such as Ariana Grande, Cardi B, Lizzo and more.

Recently, Rosario Dawson revealed she voted for Sanders again in 2020. The revelation caused the internet to pause in a moment of awkwardness as her boyfriend Sen. Cory Booker (D-N.J.), a former presidential candidate, announced his endorsement of Joe Biden for president.

No clear evidence exists on how celebrities’ support of candidates influences voters’ decisions, according to NBC News. Back in 2018 Taylor Swift’s endorsement of Tennessee Democratic candidates for Congress spurred “65,000 people registered to vote“, according to Vote.org.

For now, Halsey is unrelenting in her support for Sanders.

“A victory for Bernie would symbolize a revolutionary shift in a way that a government is supposed to work,” Halsey said “…We deserve a president like him.”