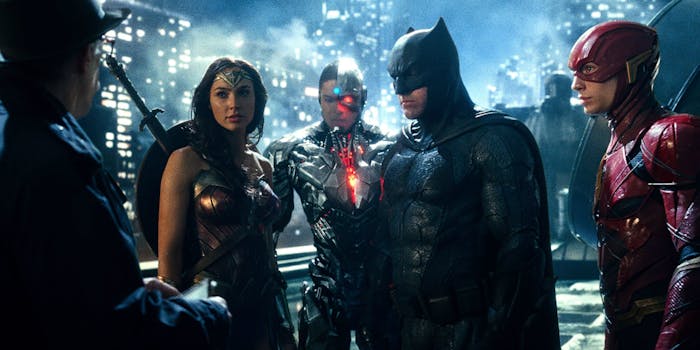 The trailers are full of scenes that weren't in the movie, and fans want answers.

Watching Justice League, it’s obvious that Joss Whedon made extensive changes when he replaced Zack Snyder as director. And while some fans welcomed Whedon’s input, others aren’t so happy. So far, more than 50,000 people have signed a petition asking Warner Bros. for a “Zack Snyder cut” of Justice League. They also want to hear the original score by Junkie XL, who was replaced by composer Danny Elfman.

The Change.org petition is long and rambling, but here’s the basic gist. Snyder fans are disappointed by Justice League‘s two-hour runtime, suggesting that Warner Bros. radically altered Snyder’s original vision. They want to see a director’s cut, including deleted scenes that supposedly flesh out the main characters and storyline.

Snyder finished filming Justice League in October 2016 but had to leave the project in May 2017. That’s when Whedon stepped in, filming two months of reshoots. Whedon now shares a screenwriting credit with the original writer Chris Terrio, something that wouldn’t happen if he only made minor changes to the script.

Although Whedon kept Snyder’s trademark visual style, fans can deduce where he altered the film. For one thing, you can easily guess which Superman scenes were reshot. Warner Bros. had to remove Henry Cavill’s mustache in post-production, giving Clark Kent a weird CGI mouth. Then there are the deleted scenes, some of which leaked online this weekend. They include more Cyborg content and the Flash’s love interest Iris West, who was cut from the movie. In addition, the first Justice League trailers arrived long before Whedon took over, so they include material that wasn’t in the final film. To refresh your memory, here’s the trailer we saw in summer 2016:

That trailer is full of scenes that wound up on the cutting room floor. The final battle also changed color from blue-black to fiery CGI red, and at one point Ben Affleck’s hairline completely changed shape because (we can only assume) he wore a different toupée during reshoots.

Here’s the thing about Zack Snyder movies: They’re long. His earlier films clock in around the two-hour range, but Watchmen is 162 minutes with a 215-minute “Ultimate Cut,” Man of Steel is 143 minutes, and Batman v Superman was 151 with an extended home release. Meanwhile, the final cut of Justice League is just 121 minutes. If you’re a die-hard Zack Snyder fan, that’s enough to tell you you’re missing out.

Since Suicide Squad and Batman v Superman both received extended editions, there’s a good chance we’ll see some of those deleted scenes on the home release. However, the idea of a “Zack Snyder cut” is a little optimistic. Some of the old scenes may not make sense in the final story, and some of Whedon’s scenes probably improved on the original. Plus, Warner Bros. may want to avoid any more moments like Ben Affleck swapping hairlines mid-scene.