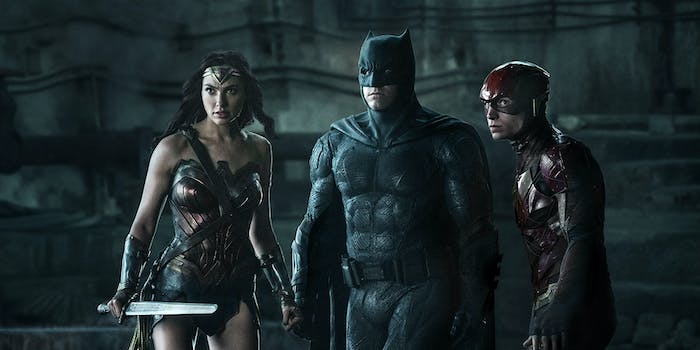 Snyder cut believers are not giving up.

It’s been two years since a certain subset of DC Comics fans asked (or demanded, in some cases) that the company’s film division release a supposed “Snyder cut” of the Justice League film. Now it seems that the Snyder cut believers are rallying around that notion once again.

They bought three billboards near San Diego Comic-Con, each boldly demanding that studio Warner Bros or DC release the supposed edit of the film.

When Snyder departed production of Justice League due to the suicide of his daughter, Warner Bros. hired Avengers director Joss Whedon to wrap things up. That split between Snyder’s darker tone and Whedon’s more comical styling led to what we at Daily Dot call a “clumsy, uneven Avengers knockoff.”

This also led some fans to believe that Warner Bros. or DC were hiding a considerably better edit of the film that was more true to Snyder’s original vision. In the interim, the fans are finding craftier ways to get Warner Bros. to admit that the Snyder Cut is real, like a petition filled with fake signatures.

Now, according to posts on social media, at least two or three billboards and signs have popped up around San Diego during Comic-Con week.

The signs read, “The 3½ hour untold story of Justice League. #ReleaseTheSnyderCut” beneath a silhouette of the Justice League characters. Both signs the Daily Dot has managed to find so far also read, “Proudly supporting [the] American Foundation for Suicide Prevention,” which appears to be a reference to Snyder’s daughter’s suicide.

The Daily Dot has not been able to confirm the exact locations of the billboard or bus signs.

According to ScreenRant, Deborah Snyder, producer of Justice League and Zack Snyder’s wife, praised the Snyder cut fans earlier this year for raising money for the American Foundation for Suicide Prevention–an effort the group appears to have taken up after the Snyders’ voiced their support for the foundation.

Of course, even after all the good the Snyder cut believers have done, it’s still a bit awkward that they’ve gone to such lengths to get a supposedly better version of a movie that probably couldn’t be saved by a few extra scenes.

"Grandpa, what did you do about the concentration camps?"
"Uh, you know– there was a lot going on at that time." pic.twitter.com/AxA83eCEEb