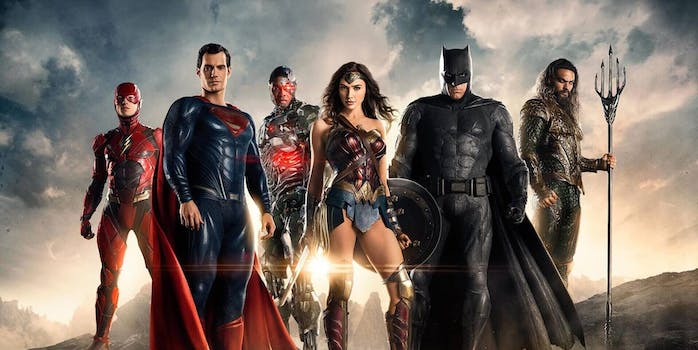 Ben Affleck and Gal Gadot both want to see the director's cut.

This weekend marked the two-year anniversary of the Justice League movie, prompting a new wave of enthusiasm for the #ReleaseTheSnyderCut movement. The campaign is driven by fans who want to see Zack Snyder’s original vision for Justice League, and on Sunday, the film’s lead actors unexpectedly chimed in. Ben Affleck, Gal Gadot and Ray Fisher (Cyborg) all called for the Snyder Cut to be released, causing the hashtag to trend worldwide on Twitter.

Ben Affleck’s involvement is a little surprising because he’s finished with the DC franchise. Meanwhile, Jason Momoa and Henry Cavill didn’t weigh in, although Momoa has supported the campaign in the past. Sunday’s tweets prompted fans to wonder if the Snyder Cut is finally on its way, but it’s equally possible that Zack Snyder just texted Gadot, Affleck, and Fisher and asked them to boost the hashtag on Twitter. Or maybe they’re just personally invested in seeing that Snyder Cut come out! The real issue here is whether a “Snyder Cut” actually exists, never mind if Warner Bros. plans to release it.

The idea of a Justice League director’s cut began after Zack Snyder departed the movie due to a family tragedy. He was in creative control for most of Justice League‘s development period and filming, but Joss Whedon took over in the final stages, reshooting some scenes and overseeing the final cut. That cinematic cut was poorly received by critics (much like Snyder’s Batman v Superman), and Snyder’s fanbase decided was a better version lurking in the Warner Bros. vault.

Zack Snyder reportedly filmed a lot of material that didn’t make it into the final cut, like extended backstories for Cyborg, Aquaman, and the Flash, and bigger roles for several supporting figures. Some characters, like the Flash’s love interest Iris West, were cut entirely. Superman’s role is thought to have changed a lot, with Henry Cavill infamously having to do reshoots while filming Mission: Impossible – Fallout, meaning his mustache had to be removed with CGI.

The Snyder Cut campaign delivers a deceptively simple demand for a complicated issue. The hashtag makes it sound like a director’s cut is ready and waiting to be released. In reality, Snyder’s early rough cuts of the film were unfinished, with incomplete CGI and editing. There were also reports from studio insiders describing his version as “unwatchable,” although others (like Jason Momoa) remain enthusiastic about Snyder’s extended depiction of DC Comics lore.

While the Snyder Cut campaign is good at grabbing people’s attention on social media, it’s also known for its obnoxious behavior, tying into the DCEU fandom’s ongoing problems with cyberbullying and sexist harassment. Former DC Entertainment president Diane Nelson wound up quitting Twitter due to harassment from Snyder Cut fans, and film journalists often find themselves deluged with toxic messages if they criticize Zack Snyder or his fans.

As it stands, a Snyder Cut could cost tens of millions to complete. Visual effects shots would need to be finished, and the whole thing would have to be edited together with sound and music. It’s entirely possible that actors would have to re-record some of their dialogue. Basically, Warner Bros. would have to go through the entire post-production process for one of the most expensive movies the studio has ever made. And while there’s a vocal fanbase clamoring for that Snyder Cut, there’s no evidence that there’s enough of them to warrant that kind of money. Outside of the DCEU fandom bubble, Justice League just didn’t have much cultural impact.

In recent months there’s been some speculation that the Snyder Cut might come out on the subscription streaming service HBO Max, which is owned by Warner Bros. This is more plausible than a theatrical release and would attract a lot of DC fans to subscribe. Considering the amount of money some other media companies have poured into launching their own streaming platforms, you can imagine Warner Bros. making this decision. But according to The Hollywood Reporter, “no announcement is imminent” for any kind of Justice League re-release. Those tweets from Gal Gadot and Ben Affleck might lend some credibility to the campaign, but it doesn’t seem like they were teasing any real news.