The ultimate battle of left vs. right is taking place on Reddit.

Birds with human arms, humans with bird heads, and bears with beaks are just a small sample of the Frankenstein-like combinations Reddit users have concocted.

Here’s one combination some Reddit moderators aren’t fond of: guns and marijuana.

“[T]hey naturally went through every post and comment I’ve ever made, and decided I was a stoner,” honkeyass commented. “They bombarded me with insults saying how I am a criminal and shouldn’t have guns. Then they banned me from the subreddit. So just be careful, not everyone is nearly as open too [sic] weed as I thought.”

The following comment from not_the_atf attempts to sum up why honkeyass has faced such backlash. 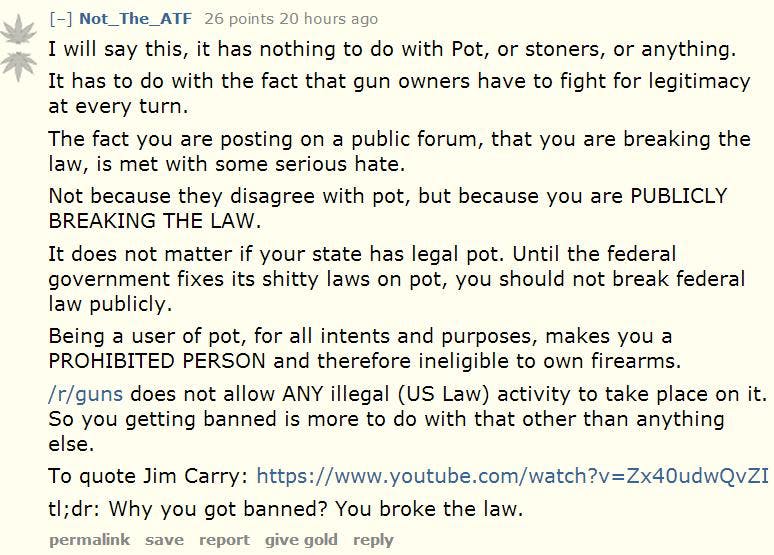 A look through honkeyass’s post history reveals photos of him smoking a joint at home, firing up a spliff outside in his car during a Christmas party, and cooking up some weed-filled cornbread. On Jan. 22, he posted on r/guns about a Mosin-Nagant rifle he had sawed off. In this particular thread, honkeyass never mentioned that he smoked weed while handling a firearm. That goes the same for two other r/guns threads he started on March 30 and April 9.

“I am a gun lover and weed smoker, but never ever even close to the same time,” honkeyass commented. “But an 120 year old gun did fire in my house, so they said pot was to blame, even though it was my friends gun, he was holding it, I was in the other room, and it was my tolerance break. It was extremely annoying. The detectives also determined that it was a gun malfunction, and that he wasn’t at fault.”

While honkeyass contends that he has never operated firearms while under the influence, the mere possession of drugs and guns is illegal. According to 18 U.S. Code § 922, possessing illegal drugs and firearms is a federal offence that can be punished by up to 10 years in prison.

Here, an r/guns moderator, Phteven_j, explains why honkeyass was banned: