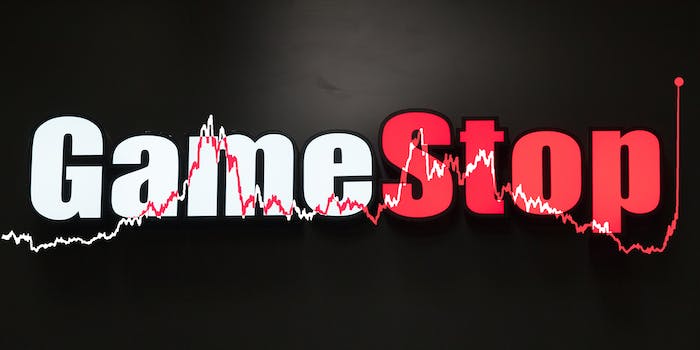 The subreddit r/wallstreetbets has had a shocking effect on the stock market once again, with amateur investors pouring money into the video game retailer GameStop. Last Friday saw GameStop soar in value for no reason other than the fact that r/wallstreetbets Redditors were buying up stock in droves.

The subreddit is somewhat self-explanatory: a forum where hobbyist investors discuss their plans to win big on the stock market. Known for its chaotic atmosphere, r/wallstreetbets is populated with Redditors who brag about winning (and losing) colossal amounts of money on risky wagers.

If you’re going to be cynical about it (and at this point you probably should be), r/wallstreetbets removes the veneer of respectability from what was already just another form of gambling. But since these Redditors are working outside of typical stock market expectations, they inevitably cause friction with Wall Street professionals.

That’s what happened with GameStop over the past few days.

As Yahoo! Money explained on Friday, GameStop is in “terminal decline” because it’s a chain of brick-and-mortar stores selling products that can already be purchased online—in the middle of a pandemic, no less. That “terminal decline” phrasing came from Citron Research, an investment website run by short-seller Andrew Left.

Last week, Left advised that GameStop was on the way out, making it a smart bet for short-sellers, or traders who gamble against a company’s success.

This irritated GameStop fans on Reddit, spurring a flood of interest in driving up GameStop’s value. The company’s share price surged dramatically on Friday and again on Monday, to the point where trading was repeatedly halted due to GameStop’s chaotic rise and fall.

This caused serious problems for short-sellers who bet against GameStop, with investors losing $1.6 billion on Friday alone. These short-sellers included the hedge fund Melvin Capital Management, which now needs a $2.75 billion bailout due to a series of failed shorts including GameStop.

Speaking to Bloomberg, Citron Research’s Andrew Left said, “Price movement aside, I am most astounded by the thought process that goes in to making these decisions. Any rational person knows this type of trading behavior is short lived.”

But that’s arguably the whole point of the GameStop surge. Investors at r/wallstreetbets aren’t making these decisions based on cold, hard logic. They’re trolling. They found a way to game the system en masse, combining two of Reddit’s favorite things: video games and absurd astroturfing campaigns.

This situation also gave r/wallstreetbets a collective enemy to work against in the form of Citron Research. And judging by the enthusiasm on the subreddit today, GameStop season is still going strong.