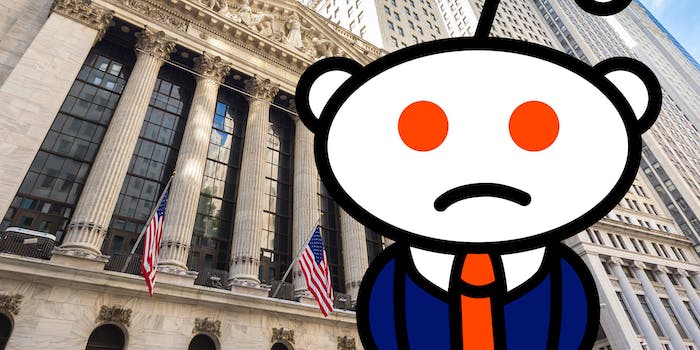 In a post that mashes up the 2003 “Ladies and Gentlemen, we got him” speech about Saddam Hussein with Barack Obama’s famous announcement about Osama Bin Laden, user bawse1 announced that subreddit creator and lead moderator jartek was banned after using the platform for personal gain by writing a book about the subreddit and promoting an organization known as the True Trading Group, which had plans to sponsor an eSports trading competition within the subreddit.

Reddit sleuths in r/SubredditDrama immediately compiled a summary of ongoing problems in r/WallStreetBets that stemmed from rumors jartek had numerous alt accounts which he used to line his own pockets.

Another former mod, Arigold212855, admitted in a leaked private conversation that he partially owns True Trading Group and that jartek is his “business partner,” confirming a murky—and potentially illegal—conflict of interest that not only violates Reddit’s Terms of Services, but allegedly breaks federal law as well.

It is unclear why Arigold212855 admitted to this relationship. Some members of r/WallStreetBets even suspect that the account Arigold212855 is actually one of jartek’s alts.

After subreddit members complained about the initial controversy, a mod account (allegedly another jartek alt) posted a long missive in which he warned posters that anyone who attempts to “harm or discredit” True Trading Group would be banned, essentially keeping the forum from criticizing his shady venture.

In response to these leadership decisions, user 13104598210 publicly de-modded themselves.

“Jartek’s actions aren’t just against Reddit rules,” they wrote. “If even some of the accusations against him are correct, he’s violated SEC regulations and there could be legal actions.”

What is Reddit’s Wall Street Bets?

Allegedly, the SEC previously investigated r/WallStreetBets in 2017 over insider trading allegations—the Championship controversy may very well follow in those footsteps.

The now-notorious Wall Street Bets Championship is an eSports competition sponsored by True Trading Group. Tickets to the Dallas-based event cost $200, with a buy-in of $50,000, and user jartek alluded to prizes in the seven figure range.

Long-time r/WallStreetBets member speaksinbooleans, whose account has been deleted, was the first to connect the Wall Street Bets Championship to True Trading Group and jartek in a post that was preserved by subreddit members (a running joke in the forum is now that the SEC awarded $2 million to the whistleblower who exposed the plan).

Additionally, speaksinbooleans used True Trading Group’s regulatory filings to show that the company did not make enough revenue to fund the contest’s prizes.

Multiple users reported jartek and their affiliates to the Securities Exchange Commission for insider trading and market manipulation.

According to the SEC, insider trading refers to “buying or selling a security, in breach of a fiduciary duty or other relationship of trust and confidence, on the basis of material, nonpublic information about the security.”

In this case, jartek was recommended subreddit users purchase marijuana stocks without disclosing that they themselves would benefit from these purchases.

Whether the SEC will investigate is still to be determined. One member of the subreddit claimed they reached out to several law offices as well.

After jartek’s removal, the rest of the r/WallStreetBets mods switched the subreddit over to private for damage control, but not before a post proclaiming the “liberation” of r/WallStreetBets and a return to normalcy. “You can continue losing your money and publicly humiliating yourselves for the schadenfreude,” the post promises.

As of now, Wall Street Bets is back, with over 1.7 million subscribers to the subreddit. Jartek is still no longer a moderator with the site.