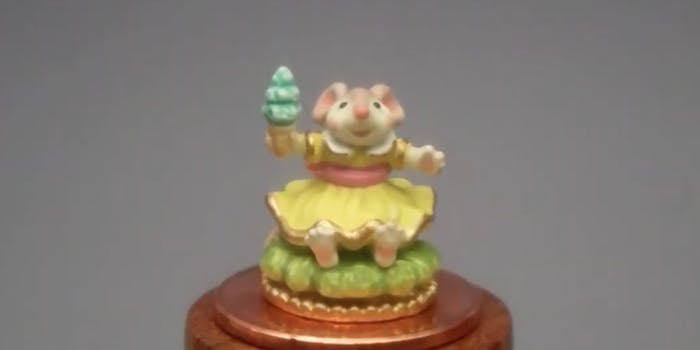 She's having marriage problems because of it.

A 34-year-old woman sought advice from redditors out of desperation: Her in-laws are treating mice figurines like real, sentient members of the family, and her marriage is suffering because of it.

The user posted her plea in r/relationships subreddit with a simple enough and therefore utterly misleading title, “I’m pregnant and struggling with my husband’s lack of support regarding my in-laws’ behavior. How can I improve the situation?”

This is an r/relationships post from the SA peanut gallery thread because the original was deleted. You will not regret reading this one although you might scream. 🐀🐀🐀🐀 pic.twitter.com/nIt12atnqI

The user first sought out advice on the “Am I the Asshole” subreddit but received an overwhelming amount of responses from people saying she wasn’t the asshole. So she migrated to the “Relationships” subreddit for some further advice.

Each mouse in the family has its own backstory, role in the family, and squeaky voice provided by one of her husband’s parents. The in-laws frequently talk to her as the mice.

“My father’s husband will squeakily say ‘My tummy hurts, I am hungry!’ while wiggling a mouse plushie in my face. I’m then expected to answer the mouse and get it, not him, something to eat,” the redditor wrote as an example.

The in-laws then get upset when she ignores the mice and doesn’t play along. They even bought her mice figurines for her own house and want them displayed when they visit.

“I understand that it’s probably them welcoming me into the family, but I’m just too creeped out by it,” she wrote.

Things escalated when she announced her pregnancy to her in-laws. Her father-in-law told her that “it would be wonderful to soon have two grandchildren.” Grandchild number one being Timothy, a giant papier-mache mouse. Understandably, the redditor got upset that her human child was being equated to a mouse grandchild.

Timothy then told her she was stupid and being disrespectful.

Marriage problems ensued when her husband of 10 years attempted to justify his parents’ behavior by alleging that “lots of people’s stuffed animals talk.” She said his lack of support made her feel lonely.

“Should I press the issue or accept the situation and try to avoid them? How should I deal with this once our child is born?” she asked on Reddit.

Twitter users–where the thread was reposted–wondered how she put up with this for all these years.

You know for her to have stuck around for 10 years of that worrying behavior that she'd seen some crap before she ever met that man.

The fact that she’s been putting up with this for ten years blows my mind, I would have been done on hour 2

Way too many relationships go on for too long bc of the sunk cost fallacy. It sucks that there’s going to be a kid in the middle of this horror movie.

The consensus is also clear: Timothy needs to be eradicated.

So Timothy is actually a demon possessing the doll, right?

the answer is clear. she has to kill timothy.

Throw a bucket of water on that papier mache mouse pic.twitter.com/Hzv1129ro2

She must find and kill Timothy to free the family

Dress up as a cat everytime you see them and start chasing them around screaming about playing with their lifeless bodies… or get a divorce/ restraining order, to each their own

Along with the comedic responses were some serious suggestions.

I think I would file a restraining order against all of them, file for divorce and disappear. This all seems fairly abusive and unhealthy. That husband will continue to side w his parents. He's just as cracked as they r. Also most adults don't use stuffed animals like that.

"I'm never going anywhere near your parents ever again and they're having no contact with our child" looks perfectly reasonable in this instance.

Unless Peele is writing the script, this is too ridiculous for fiction.

"If you ever want to see your *actual* child/grandchild again, you'll drop this ridiculous bullshit."

Difficult but not impossible solution.

Redditors were keen to suggest therapy so her husband can understand how this is so not OK.

Mental disorders such as schizophrenia were also floated around as a possible explanation, as was child or pregnancy loss. Yet, the redditor seemed to confirm that this isn’t a coping mechanism for the loss of a child.

I read through the original and she says that so far as she know, there were no deaths in the family or miscarriages or anything like that.