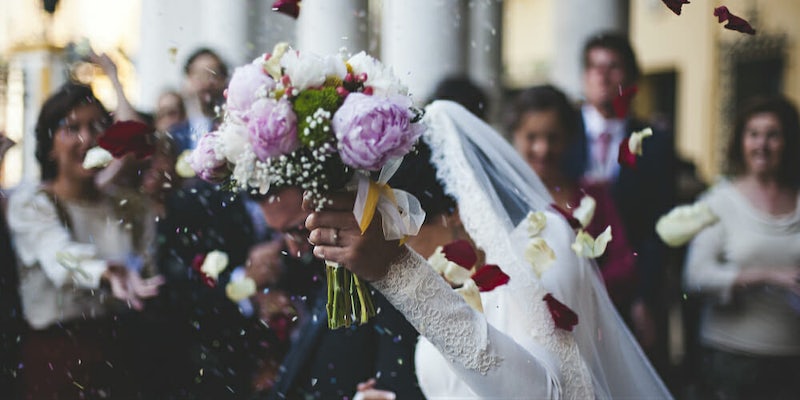 'It's not our fault we got bad info about the dress code.'

The typical monster-in-law wears white to their son or daughter’s wedding. One creative mom found a new way to ruin the big day: She tricked guests into wearing jorts, hoodies, and baseball caps.

A redditor explained how her cousin, the groom, is now mad at her and her husband for showing up to his wedding reception in extremely casual attire: a hoodie, daisy dukes, and sandals.

“The day before the wedding, my aunt rounded up me and my family members and told us that she just found out that the dress code for the wedding was casual,” user u/DDR238 wrote in the r/AmItheAsshole (Am I the Asshole?) subreddit.

As it turns out, the wedding wasn’t casual at all, the groom’s mother just wanted to sabotage it, according to the redditor.

“I noticed that the bride’s family members were still dressed up but I figured they didn’t get the memo. The bride and groom and the wedding party were dressed to the nine’s which I thought was weird for a casual wedding,” the redditor wrote.

The aunt in question was unhappy that her son and his new wife were getting married at a national park instead of a church or banquet hall. The couple thought that it was “very disrespectful” for the guests to show up in the casual attire.

“TBH we think (the bride and groom) are overreacting because we all had fun at their wedding and it’s not our fault we got bad info about the dress code. And they never specified in the invitation. But I still have to ask. AITA?” the redditor asked.

Many think that the redditor is, in fact, the asshole for thinking that jorts and hoodies are appropriate–even for “casual” attire.

“YTA,” one user replied. “I would have been upset with you too.”

Others think the aunt in question is the real asshole here.

This is a story that has a villain, and it is the mother/aunt and she is a monster.

Even if the groom’s mother is the asshole, the couple is still upset that no one double checked with them before showing up, looking like slob-kabobs.

Or the best man or maid of honor, anyone in the wedding party.

imagine not checking with the bride and assuming the B R I D E S family are the ones who “missed the memo” I’m so offended on behalf of this bride pic.twitter.com/AU4fF50ChQ

Many are siding with the redditor because they, too, think that casual means normal attire.

“I will be honest I would have assumed casual meant normal clothes as well,” one user replied.

The redditor later further detailed the extent of the aunt’s deception.

“My aunt told us that their wedding was a backyard cookout and we could wear whatever we wanted. It wasn’t a cookout the wedding was catered,” the redditor wrote.

People are clearly divided, with many thinking that there are actually two assholes here.

The aunt is clearly an asshole but OP is so stupid it hurts. Like why would you believe the aunt when she clearly didn't like how they organised the wedding? And who thinks shorts and a hoodie is appropriate at even the most casual of weddings?

According to the story, the aunt has been griping about this wedding the entire time, unbeknownst to the bride and groom. So the first thing you do is believe her when she says the wedding she hated is now super casual. At the last minute. Yeah the aunt sucks but OP is dumb.

In the end, the redditor defended her aunt and justified not apologizing to her cousin.

“I didn’t apologize. I’m not close with my cousin and I feel awkward talking about it with him now I’d feel more comfortable getting my aunt to apologize to them on out behalf,” the redditor wrote.

This writer is sneaky. She does a good job hiding that she's an asshole. It's easy to get distracted and just think "it's the aunt's fault" (which it is).

But then, in the TL;DR, she accidentally exposes that they feel zero sense of personal responsibility or shame. Assholes.