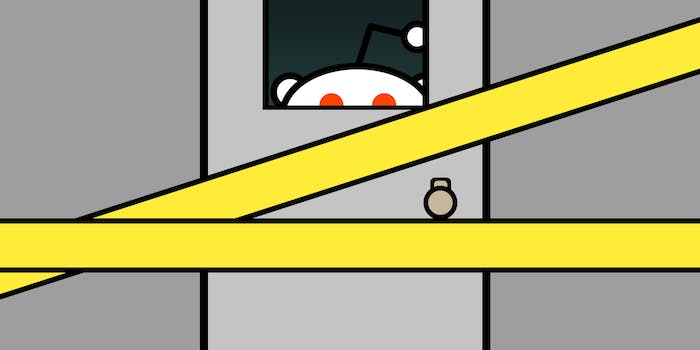 Reddit bans r/TheFappening, the subreddit at the center of Celebgate

Reddit administrators took an unexpected step late Saturday night to address the site’s role in a massive leak of naked celebrity photos, shutting down the subreddit that gained global infamy as a central repository for the pictures.

In describing the decision to close down r/TheFappening, which was created by Reddit user johnsmcjohn in the early hours of the photo leak, Reddit CEO Yishan Wong said, “While current US law does not prohibit linking to stolen materials, we deplore the theft of these images and we do not condone their widespread distribution.”

On the subreddit for the company’s blog, Wong, who goes by yishan on the site, elaborated on Reddit’s reasoning. “We don’t ban subreddits for being morally bad,” Wong wrote. “We DO ban subreddits for breaking our rules, and one of them is repeatedly and primarily being a place where people post copyrighted material for which valid DMCA requests are being received.”

After news of the ban broke on Saturday evening, johnsmcjohn took to Reddit to contest the decision. “I don’t want reddit to fold to the lawyers of these celebs,” he wrote. “If they’d banned my sub on Monday, I would be okay with it. But, they waited a week and had more than a quarter billion page views before they banned me.”

In one of several earlier posts, before the administrators issued their statement, johnsmcjohn insisted that, while he was “not a lawyer,” he had “tried to ensure that the pics that were posted to the sub complied with reddit’s site-wide rules.”

Reddit’s post notes that the company has been attempting to remove all content hosted on its own servers in accordance with requests made under the Digital Millennium Copyright Act. “In cases where the images were not hosted on our servers,” yishan wrote, “we promptly directed them to the hosts of those services.”

The statement emphasizes the Reddit’s view of itself as “not just a company running a website where one can post links and discuss them, but the government of a new type of community.”

“We will try not to interfere,” Wong wrote, “not because we don’t care, but because we care that you make your choices between right and wrong.”

Reddit took a similar kind of action in 2012, banning the r/creepshots subreddit, but the explicit photos taken without consent that used to be posted there quickly reemerged on Reddit in all but name.

It is unclear what johnsmcjohn will do now that his subreddit is gone. Shortly before Reddit issued its statement, he struck a defiant tone. “I’ve sacrificed for this sub,” he wrote. “I’ll be goddammed if I get it taken away without a fight.”