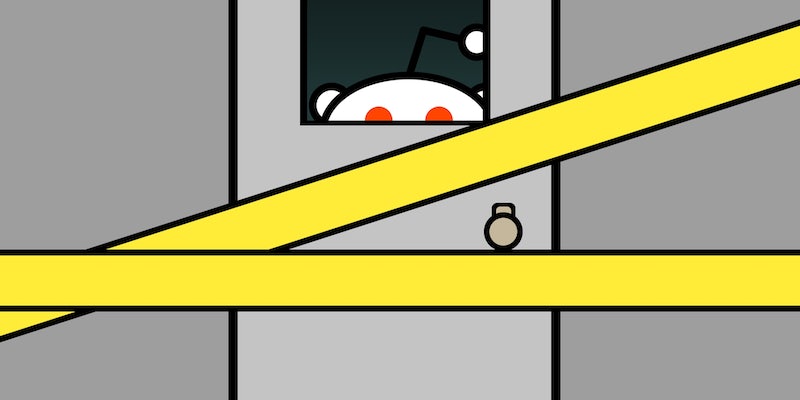 The controversial Reddit community that featured women being brutally beaten has been banned.

The subreddit, r/beatingwomen, was shut down Monday evening after moderators—volunteer redditors tasked with managing the community—posted a user’s personal information online.

This practice, known as “doxing,” is against Reddit’s rules. Reddit administrator and community manager Alex Angel (u/cupcake1713) stated so in a message regarding the ban.

“After we banned those individual moderators for their actions, YOU IDIOTS ADDED THEM BACK ON NEW ACCOUNTS TO KEEP MODERATING YOUR SUBREDDIT,” Angel said. “Your mod list is full of people who have been banned and banned and banned again, and you can’t be trusted to keep things on the up and up. That is why your subreddit is banned.”

The r/beatingwomen community was created three years ago by infamous Reddit troll David_Berkowitz, named after the American serial killer from the 1970s who killed six people.

In August 2011, the subreddit was thrust into the limelight when a post called “These are real women. These are real crimes. Make this stop, reddit” reached Reddit’s front page. The post linked to the r/beatingwomen subreddit and an image of a woman being punched by a larger man.

Who submitted that image? That’d be Violentacrez, Reddit’s king of NSFW content who pushed the limits of free speech through communities like r/jailbait (which featured sexualized images of underage girls) and r/creepshots (which featured suggestive photos of women taken in public and without their knowledge).

“I was not surprised by the outrage of the person who made the post, because I see it all the time,” Violentacrez told me in 2011. “What was surprising was the community support for it. Most posts that complain about these things never do very well, and are quickly buried or deleted. … I think it’s interesting how many people defend my right to act the way I do, while decrying my posts themselves.”

Despite the outrage from the community—the thread saw more than 3,000 comments—r/beatingwomen and its content didn’t break Reddit rules and thus couldn’t be removed.

“We’re a free speech site with very few exceptions (mostly personal info) and having to stomach occasional troll reddit like /r/picsofdeadkids or morally questionable reddits like /r/jailbait are part of the price of free speech on a site like this,” Reddit general manager Erik Martin wrote on July 20, 2011.

R/beatingwomen was safe at the time. R/jailbait and r/creepshots, on the other hand, were not.

Both subreddits, and a handful of clones, were banned by Reddit administrators following intense media scrutiny. In October 2012, Violentacrez had his identity revealed by Gawker’s Adrian Chen. Violentacrez, real name Michael Brutsch, was fired from his job.

While the Reddit community has rejoiced at seeing r/beatingwomen shut down, David_Berkowitz has rebooted the subreddit under the name r/beatingwomen2.

This is a common trend among controversial subreddits. While r/creepshots remains banned, r/candidfashionpolice and r/facebookcleavage were created in their place and now have more than 45,000 subscribers combined—nearly four times as strong as the original forum was.