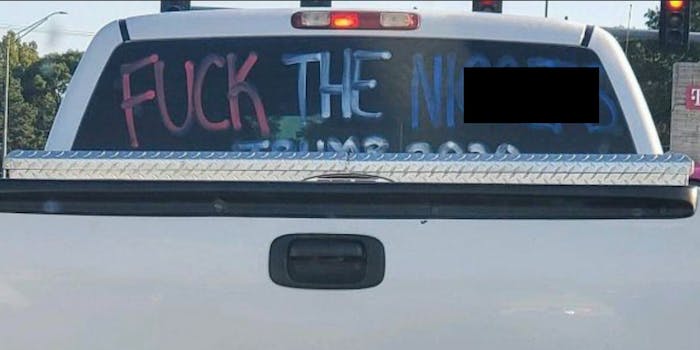 “I’m not a racist. All lives matter.”

An apparent Trump supporter in Lincoln, Nebraska is getting destroyed online after his truck was allegedly spotted with a racist slur, above scripting saying, “TRUMP 2020.”

On Saturday, Mahapatra tweeted, “In Lincoln, this evening” and then embedded the photo of the truck in the tweet. Empathy and anger spilled from subsequent tweets and replies to Mahapatra’s posting.

“I feel so bad for any black person that had to see this while driving down the road. This shit has to end,” tweeted @kevinmaherbb. “The people pushing this kind of message need to be the ones that don’t feel welcome here. They are the ones that should be uncomfortable existing in this country.”

1011 News anchor Bill Schammert tweeted in disgust, but also questioned the legality of the racist message: “I’ve been trying to find the words, but I can’t. Disgusted. Outraged. Heartbroken. Sad. This may even qualify as illegal under the new hateful intimidation ordinance passed by Lincoln City Council earlier this summer.”

Cordis told the Omaha World-Herald that he drove his truck to Gateway Mall in Lincoln about 5pm on Saturday. He told the paper he was in the mall for “about 20 minutes” and came out to find the racist message scrawled on the truck.

He said he took his truck to a car wash and did not file a vandalism report with the Lincoln Police Department.

“It’s something someone else did,” he said. “I just washed it off. I thought it was stupid.”

However, according to the World-Herald, a woman named Brittany Struble said she and a friend saw Cordis arrive at the mall with the racist statement already painted on the truck.

They snapped the original, wide-shared photo of Cordis who was leaning out of his vehicle. Struble told the newspaper that he looked at them and said: “What, what, what?” and that he ultimately didn’t enter the mall. Struble said he left after the brief confrontation.

“He knew what we were asking about because I was taking a picture of it,” she said. “He was smiling the whole time.”

Cordis says he’s been receiving death threats and also told the paper “it’s possible” someone with an ax to grind might have painted the message.

“This is what Trump has done,” tweeted @author_krecker, fearing what could come to bear. “I mean, it’s not that the racists and Nazis weren’t always there, but there was a time when we’d chased them into the shadows. Now there back out in the open. We’re not that far from widespread, open lynchings.”