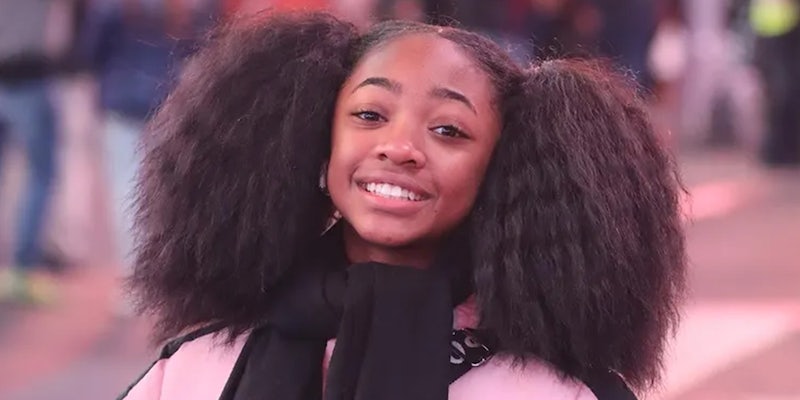 Jeffries faced online harassment after being cast as Annabeth in the new 'Percy Jackson' show.

Days after the Disney+ show Percy Jackson announced three new cast members, one of the actors is facing a sadly familiar form of backlash. Twelve-year-old actress Leah Sava Jeffries is being harassed simply because she is Black, while the character she will play, Annabeth Chase, was described as white in the original novels.

Echoing similar harassment campaigns against Amandla Stenberg in the Hunger Games movies and John Boyega in Star Wars, this backlash cast a pall over an exciting moment in a young actor’s life. It also prompted a staunch defense from the rest of the Percy Jackson fanbase, who were horrified to see this kind of racism in their community. Over the past few days, they’ve flooded the #LeahIsOurAnnabeth hashtag with supportive posts.

Sometimes described as a more inclusive alternative to Harry Potter, the Percy Jackson novels are a fantasy series whose first volume arrived in 2005. Two movie adaptations were released in the 2010s, but neither received an especially positive response from dedicated fans. Author Rick Riordan is more directly involved in the upcoming Disney+ series, inspiring hope that this show will finally give the novels their due.

Riordan and Jeffries both responded to the harassment, with Riordan publishing a vehement defense of Jeffries’ casting. Praising her performance (“She will be a role model for new generations of girls”) and Disney’s commitment to diversity, he struck back at the negative comments: “You are judging her appropriateness for this role solely and exclusively on how she looks. She is a Black girl playing someone who was described in the books as white. Friends, that is racism.”

Meanwhile, Jeffries confirmed on Instagram Live that her TikTok account was deactivated due to mass reports from the harassment campaign. “I guess all the people who did not want me to be Annabeth or something, they literally took down my whole account,” she said.

She put a brave face on the situation, cheerfully redirecting her followers to a backup TikTok account. But as many fans have pointed out, it’s pretty horrifying that a 12-year-old has to handle this kind of situation in the public eye.

Responding to comments on Twitter, Rick Riordan’s wife Becky Riordan wrote that Disney and Jeffries’ family were handling Jeffries’ issues on TikTok and that there’s a whole social media team in place to assist the show’s lead actors.

Fortunately, the racist fans do seem to be in the minority here, with Riordan and Jeffries both emphasizing that the overall response is very positive. Over on TikTok, the most popular new post on the Percy Jackson tag is from a middle-school librarian who works at a predominantly Black school. Apparently her students love Percy Jackson, making the Annabeth casting super exciting news. “I’m so happy that I actually can’t wait to go back to work tomorrow,” she says, praising Leah Jeffries’ casting in a TikTok that’s now been viewed almost half a million times.

The Daily Dot has reached out to Disney+ and the show’s representatives for comment via email.