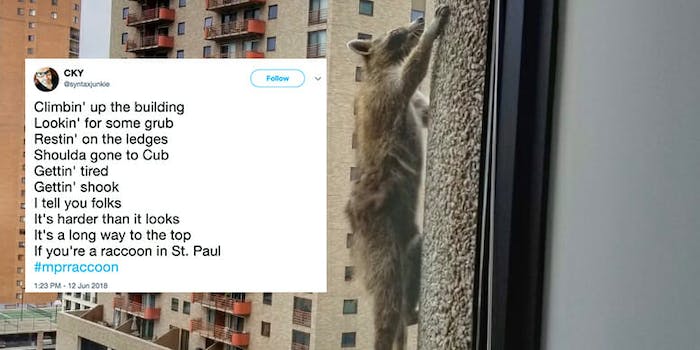 An extremely brave (or extremely stupid) raccoon scaled a Minnesota building on Tuesday, shocking onlookers and sending Twitter into an anxious frenzy.

Photos on social media showed the little dude, dubbed #MPRRacoon by Minnesota Public Radio, scaling past St. Paul office windows. According to the Washington Post, the animal had at one point Tuesday afternoon paused on a ledge 20 stories off the ground.

My picture from the 13th floor around noon. Hope he makes it down OK! #mprraccoon pic.twitter.com/gfVWysn9iO

The #mprraccoon is now 20 stories above the roof of Town Square, more than 200 feet above street level. Seems to be taking a break there. @MPRnews pic.twitter.com/MiP3KGtrW7

Follow the steep and scary journey of the #mprraccoon up St. Paul's UBS Tower…https://t.co/A6mU2IwYXS pic.twitter.com/0BogZE8y7S

It didn’t take long for reporters, Twitter, and the city of St. Paul to rally behind the creature. People had songs for the raccoon (to the tune of AC/DC).

Climbin' up the building
Lookin' for some grub
Restin' on the ledges
Shoulda gone to Cub
Gettin' tired
Gettin' shook
I tell you folks
It's harder than it looks
It's a long way to the top
If you're a raccoon in St. Paul#mprraccoon

And MPR made him the headline of the day.

Rest of the world: "how about that #SingaporeSummit huh?"

Twin Cities: "NO TIME FOR THAT. There is a RACCOON climbing a BUILDING."#mprraccoon

The MPRRaccoon also became the source of anxiety for Twitter users Tuesday, as people feared for his safety and wondered how in heck he would ever get down.

Mood: I am stressed about a lot of unknowns, and I am crying about a raccoon trapped on the ledge of a building in Minneapolis.

WILL IT BE OKAY?! #mprraccoon

Me hitting refresh to see if there's any new news on the #mprraccoon pic.twitter.com/t3MNIjxcuG

WHY IS THERE NO RACCOON EMOJI?! (Also, can someone spot me a Xanax?) #mprraccoon

Some suggested ways to save his life.

Ways to save the #MPRraccoon

By Tuesday afternoon, the St. Paul Fire Department had paid a visit to the ledge-lounging raccoon. There was little firefighters could do from behind a sealed window, but cat food awaits the critter if (and when!) he’s able to get up there.

Can confirm #MPRraccoon is still itchy. Got a little visit from @StPaulFireDept too! Cat food awaits it on the roof. pic.twitter.com/WeOTWmbaqz

It’s safe to assume at this point, the raccoon wants nothing more than to get safely home—and we’re rooting for him all the way there.