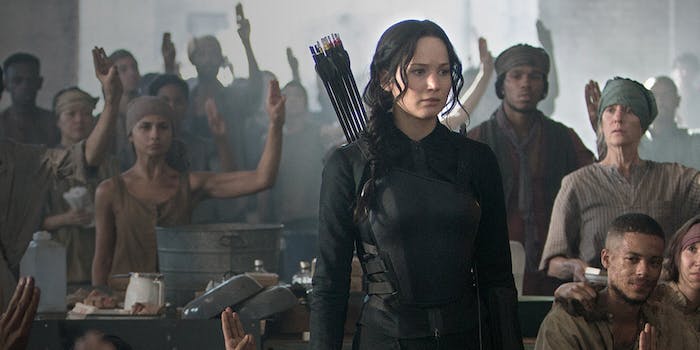 A movie about a white girl fighting back against fictional oppression? Not the best comparison.

It’s very tempting to compare the Hunger Games to real-life events like Ferguson. Perhaps too tempting.

The Hunger Games series follows on from a long tradition of dystopian sci-fi movies where underdog heroes fight back against their oppressors. It’s a popular theme, for obvious reasons: everyone loves an underdog, and Hollywood has a lot of practice at drawing up dystopian scenarios that feel vaguely relevant to current events. If Mockingjay, Part 1 had come out a month later, we’d probably see people comparing Panem’s propaganda war to North Korea and the recent Sony hacks. So it goes.

Since Mockingjay‘s release coincided with the rise of the #BlackLivesMatter movement, it wasn’t hard to draw parallels between Panem’s violent revolution and images from TV news. But is it really such a good idea to take a story where racism, sexism and homophobia are replaced by the less controversial Capitol-District class divide, and use it to illustrate real-world struggles?

In a recent video, YouTuber Laci Green used Mockingjay to lead into a conversation about racism and the historical influence of not-so-peaceful protests. She makes a lot of good points but fails to touch on one of the most awkward issues in this kind of discussion: the problem with using heavily fictionalized allegories as a crutch.

Sometimes, it’s easier to connect with fiction than with real life. That’s why “Orwellian” is still our go-to buzzword for any kind of surveillance state and why complicated ongoing news stories get boiled down into a simplified narrative. If the Hunger Games was based on a true story about child soldiers rebelling against a murderous dictator, it wouldn’t do nearly as well at the box office. Dystopian settings can only be used for popular entertainment when they’re a few degrees removed from our own experiences. So for all that Mockingjay plays up to the war movie genre, its politics are glossed over by a veneer of fantasy—and the most fantastical element of all is the dismal old trope of white savior heroes.

Equilibrium, Divergent, Elysium, the entire X-Men franchise—all of these films deal with dystopian social divides, and all of them feature underdog protagonists who are played by white, able-bodied movie stars. Even in The Hunger Games, Peeta’s prosthetic leg and Katniss’ hearing loss were written out of the movie adaptation.

On Tumblr, where fandom regularly clashes with political activism and commentary, the Hunger Games vs. reality comparisons have been a problem for years. A worrying number of fans seem to view things like the “I Can’t Breathe” movement through the lens of revolutionary Panem, and not the other way around. At the risk of sounding too condescending, there’s a big difference between acknowledging the effectiveness of Mockingjay as an allegory, and combining the District 12 salute with some photos from the Ferguson riots to make an inspirational macro about freedom.

To put it bluntly: If you find it easier to engage with fictional white heroes than with the real victims and survivors of racism, systemic oppression and violence, then you need to reconsider your priorities.

This easy identification with Katniss has a number of explanations, including the obvious fact that we experience the entire series of books and movies from her perspective. A huge amount of effort has gone into making Katniss Everdeen’s story as appealing as possible, and audiences feel like they understand her and her problems. Meanwhile, the news media is filled with conflicting opinions of how to portray individuals like Michael Brown or Trayvon Martin, the real-world victims of racist prejudice. After all, the New York Times, a paper of record, called Martin “no angel” in a headline.

More pessimistically, there’s the racial empathy gap to consider. Recent studies indicate that white people find it harder to empathize with black people’s pain—or that they believe black people experience less pain altogether. This is backed up by the fact that black and Latino patients are routinely given smaller doses of painkillers than white patients, and by the obvious racial discrimination within the U.S. criminal justice system. In the case of the Hunger Games, we have an incredibly literal example in the form of Rue, a character from the first book and movie. 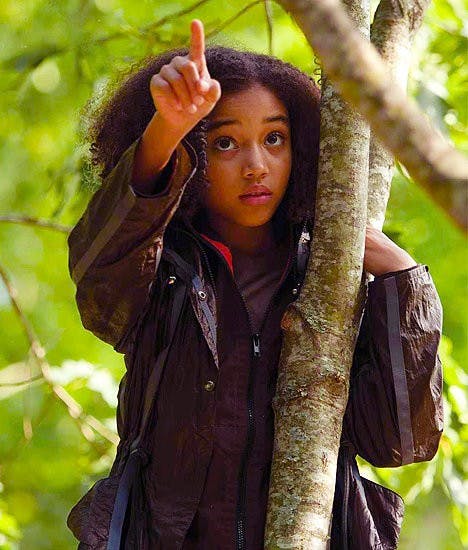 Rue is clearly described as dark-skinned in the books and was subsequently played by an African-American actress. But when the film came out, her appearance inspired a disturbing amount of racist backlash from fans, who tweeted things like, “Call me racist but when I found out Rue was black, her death wasn’t as sad.” Some audience members simply couldn’t deal with the concept of black girl playing a role that was meant to be innocent and sympathetic, and therefore, they didn’t feel as sad when she died. In most cases, they’d actually ignored her description in the books and decided she was white all along.

We saw this kind of reaction more recently when people responded negatively to Quvenzhané Wallis starring in Annie, but it feels even more bizarre coming from fans of the Hunger Games, a story all about the evils of unearned privilege. From the out-and-out racists who posted hateful messages about Rue to the well-meaning fans who use Katniss and Panem as stand-ins for real political issues, the racial empathy gap is alive and well.

I’m not saying that it’s wrong or bad to identify with things that happen The Hunger Games. Hell, I find the entire series incredibly compelling, not least because I fall into the target demographic of “millennials who are about to inherit a garbage world from the baby-boomer patriarchy.” But it’s important to remember that Mockingjay is part of a commercial franchise whose success relies on lifting imagery from real-world political uprisings and then putting Jennifer Lawrence in the foreground. It’s certainly not an ideal parallel for existing struggles with racism and bigotry, and for all its clever world-building, it still plays into some problematic Hollywood ideas about who can—or should—be saving the world.