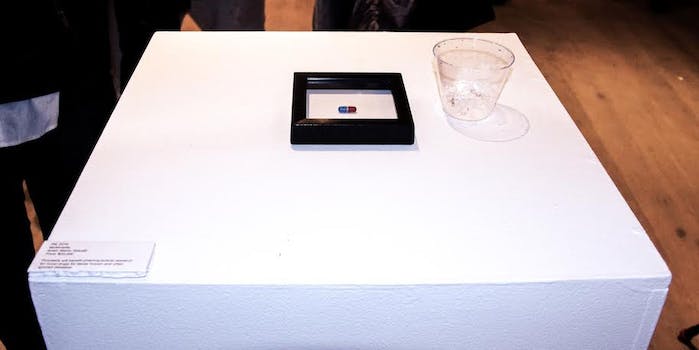 Sarcasm and smugness were the themes at Saturday night’s “#DaddyWillSaveUs: A Pro Trump Art Show,” which for some reason I thought would be funny to attend. But amusement was hardly all at stake: The Daily Dot had been accused by Breitbart News of collaborating in a media blackout around the supposedly edgy New York installation, so it seemed only fair to show up and give it the coverage it clearly deserved. 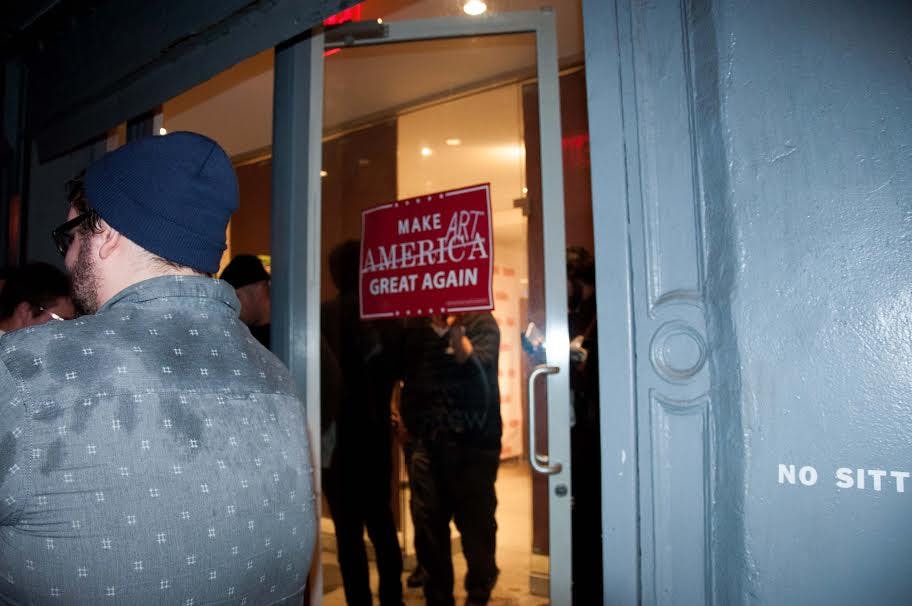 Against a backdrop of Banksy-esque, reactionary, pop art: Moneyed, urban alt-righters gathered as chicly as their yacht club aesthetics allowed to sip wine and pose for pictures with celebrity contributors like Milo Yiannopolous and the world’s most punchable thirtysomething, Martin Shrkeli. This gallery opening set itself apart from usually free Chelsea shows in that entrance prices ranged between $65 and $3,500 (which at least one person actually paid), payable on the show’s Indiegogo page. The money presumably went toward “Making Art Great Again.”

Among the actual art was a pile of scorched 2nd- and 3rd-grade math textbooks; a triptych of sarcastic apologies for rape, slavery, and Columbus Day (read: genocide of indigenous people); and grainy, oversized prints of unclothed white men wearing the iconic Trump hats. The most noteworthy piece was by Shkreli. His singular work was conceptual: a red and blue pill, titled “Pill,” with a sharpie “Martin” signature on the white matte in a small black shadowbox. The price was listed at $20,000, although it appears, according to Breitbart, that the price has already dropped by 25 percent. The plaque stated: “proceeds will benefit pharmaceutical research for novel drugs for lesser known diseases,” which makes it sound like it’s going to his company, if not him. This artwork immediately reads as a “fuck you” to critics of Shrkeli’s 2015 5,000% price hike for an anti-malarial HIV drug. Heavy-handed and lacking in complexity, Shkreli uses this objet trouvé to brag about his ability to manipulate a monopoly to extreme financial success.

Afraid to own up to this statement on camera even in a Breitbart interview, Martin shied away from his clear thought process and spoke abstractly.

“The point of the art is that this pill represents, to me, the purity and the pricelessness of life.  At the end of the day we all want to be healthy we all want to be successful and happy and I’ve encountered many personal tragedies in my life where sick people either became healthy or sick people became sicker and died. And to me my medicine and medicine in general is art the same way a painter paints with vibrant blues and reds, chemists paint with hydrogens and carbons and atoms to form amazing new medicines.”

Martin describes his work as representing “the purity and pricelessness of life,” which is not clearly communicated by the $20,000 price tag. But going on to reveal his medicine is art scratches at something deeper. I feel like we have misunderstood Shkreli all along in his efforts as an extremely political performance artist. His oeuvre actually focuses on the horrors of unchecked capitalism.

In his first highly affecting work, “Raising drug prices on your HIV-positive uncle,” galvanized an entire generation that was, until then, fairly apathetic about absurd drug prices. His second work, “Artist smugly takes the fifth in front of House Oversight Committee,” proves to us that our government currently does little in the way of protecting its citizens from the monopolies of wealthy robber barons. Other, perhaps relatively minor works include “Just because you like hip-hop doesn’t mean you’re not a bigot” and “Securities fraud is still happening, how have we not taken care of it yet when it devastated our economy 8 years ago?”

Unfortunately, our generation, while sending tons of derision Martin Shkreli’s way, hasn’t answered his call to action, which brings us back to the central point of this stupid art show: Vote.