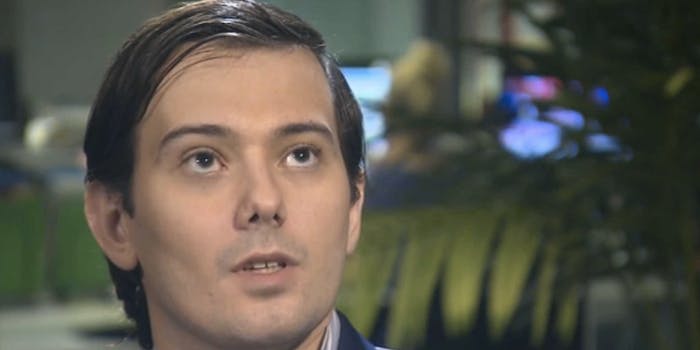 Earlier this week, news broke that the doe-eyed mogul Martin Shkreli’s pharmaceutical company Turing planned to raise the price on the drug Daraprim from $13.50 to $750 per pill. The drug fights toxoplasmosis, an infection that is particularly harmful for people who have AIDS or otherwise weakened immune systems.

Amid the Internet-fueled public outcry that followed, Samantha Allen at the Daily Beast wrote, “Shkreli, whose company only acquired Daraprim last month, has already dethroned the dentist who killed Cecil the Lion as the most-hated man in America.”

Although Shkreli quickly announced that his company plans to lower the price of the drug because of the social media backlash, people still seem intent on hating this humble businessman. He’s even made his Twitter account private to protect himself and his feelings.

But Shkreli has a softer side that the world needs to see. And we’re not just talking about Shkreli’s reported love of emo and pop-punk music. The Daily Dot found an archived version of what appears to be Shkreli’s deactivated OkCupid page, and here we get to see Shkreli’s vulnerable true self. 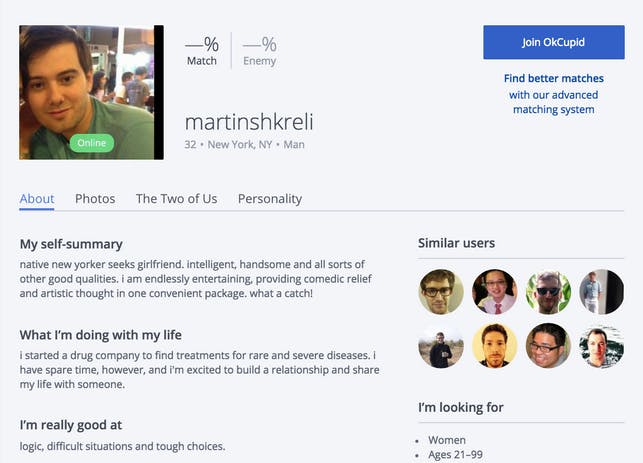 He’s intelligent and handsome and he has all sorts of other good qualities! Like the confidence that he could raise the price of a life-saving drug by more than 5,000 percent overnight without consequence? My heart is already melting.

He’s saving humanity and he still has time for a relationship? Plus he’ll be rich with all his Daraprim money! Where did I sign up to suck this D?

Shkreli can navigate difficult situations and make hard calls both in the professional and personal realms. Raising the price of a drug to $750 per pill was inarguably a tough choice, and while many would be too cowardly to do it, my dear Martin was strong and brave. 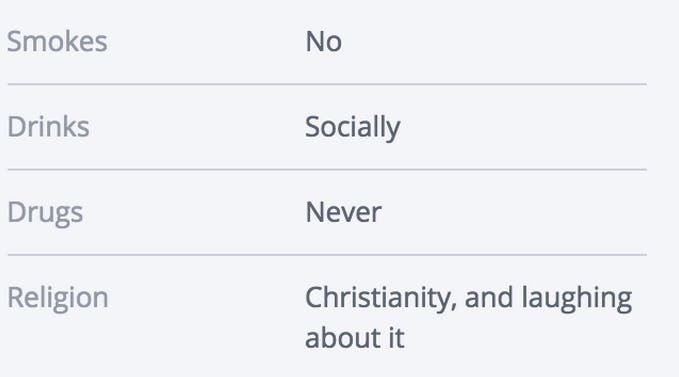 OK, Marty boy, with your love of pop-punk and emo music, I thought maybe you’d have a chiller attitude towards cigarettes and drugs. (Plus, you run a drug company, LOL!) At least he’s not too serious about his Christianity.

See, Martin does spend time thinking about human suffering. As to whether he wants to increase human suffering or decrease it—I’ll have to ask on our first date!

More than a mil? I’m sold. Martin, if you’re looking for a younger but still mature mate, shoot me an email. I eagerly await your reply.