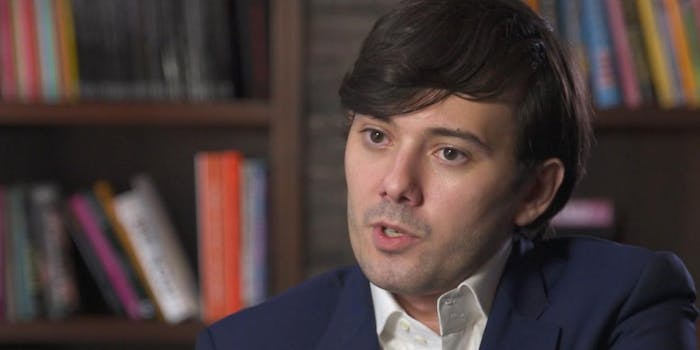 This has to be an act, right?

The man who’s so very easy for the Internet to despise was arrested by the FBI last month on a securities fraud charge, but that hasn’t stopped Martin Shkreli from continuing to talk. And, for that matter, to make enemies with the rap group he reportedly loves.

On Thursday, Shkreli released a video dissing Ghostface Killah of Wu-Tang Clan and demanded an apology for his recent insult of Shkreli.

Shkreli—who became well known to and hated by the public when his pharmaceutical company, Turing, hiked up the AIDS drug, Daraprim, by more than 5,000 percent—also purchased the lone copy of Wu-Tang Clan’s latest album, Once Upon a Time in Shaolin, for $2 million.

But when Wu-Tang discovered Shkreli’s reputation (he bought the album before raising the price of Daraprim), the group was quick to distance itself from him. Ever since, there’s been a slow-burning feud between Shkreli and the Clan.

Ghostface Killah recently called Shkreli a “shithead” and said he should release Shaolin to the public.

Ghostface responded by making fun of Shkreli’s nose and comparing his looks to those of Michael Jackson.

Thus, Shkreli decided to try to beat the rapper with a war of words. It goes a little something like this, via TMZ.

I assume—and yes, that’s probably a big risk—that there’s no chance Shkreli is serious here. The nice sports coat, the snifter filled with what’s probably way-out-of-your-league brandy, the stereotypical goons (who likely are fellow hedge-fund buddies underneath the masks) drinking liquor straight from the bottle and cursing Ghostface Killah’s name. It’s a two-bit pro wrestling angle from the 1980s.

Hell, it’s like Shkreli is the second coming of Ted DiBiase. It has to be fake.

But it’s not, so it’s finally time to wonder the real question in all of this madness: What’s taking Bill Murray so damn long?