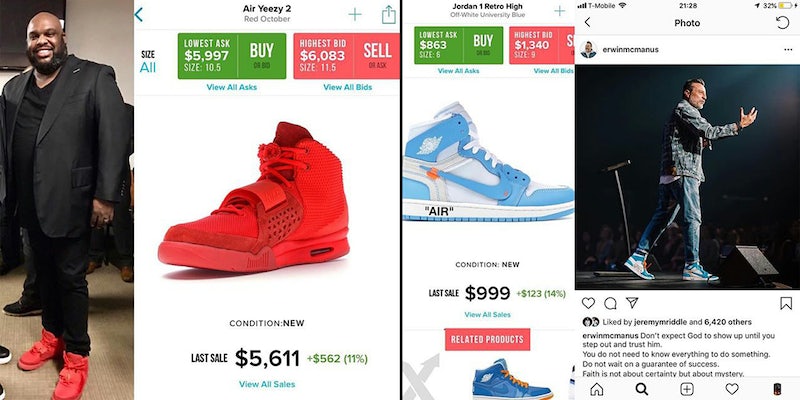 This Instagram is dedicated to calling out preachers in expensive sneakers

An Instagram account called Preachersnsneakers looks at the footwear habit of some of America’s most famous preachers, and a quick look at the account reveals the high-level sponsors and big money that flows into their churches. It has many on social media asking, “what are those?“

The awareness comes thanks to 29-year-old Tyler (the site’s creator wishes to remain anonymous), who lives on the West Coast and works in the tech industry. He was looking at a music video by Elevation Worship, a Christian Evangelical band, and noticed some of its members wore expensive sneakers. Being himself a usual buyer and reseller of sneakers, he started looking for more examples.

“I started to realize that there were a lot of leaders in the church that were wearing some of the most desired sneakers and streetwear so I decided to document it, mostly for laughs,” he told the Daily Dot.

He created an Instagram account mostly out of a joke with a friend, he said. It quickly gathered attention. As of today, 88,800-plus people follow the page. (It gained about 15,000 followers over the last week after being featured on BuzzFeed.)

For Tyler, what’s interesting about the page is the many different takeaways people get from his posts. BuzzFeed called it an “existential morality spiral.” Like, is it OK for these megachurch pastors to don such glossy shoes? The comments are divided.

“The most surprising thing is how many points of view there are on this topic and how people from completely different sides can both see this content as beneficial. It’s very strange,” he said.

A post shared by PreachersNSneakers (@preachersnsneakers) on Apr 6, 2019 at 6:04am PDT

The pastor commented on his luxurious way of life last year. “My thing is this: If you work hard and pay your taxes, then you should be able to live where you are able to afford. I think that pastors do have a responsibility to be wise with the things that they have,” Gray told the Houston Chronicle.

Tyler thinks that explanation falls a little short when it comes to self-awareness.

“The leaders within our churches also need to be aware of the optics around the things they wear and how it might affect the people in their church body,” Tyler said.

I think the value of this account (which could easily turn dark) is in keeping pastors accountable to the Word of God. James 3:1 warns these men, “My brethren, let not many of you become teachers, knowing that we shall receive a stricter judgment.” Additionally, just because you can afford to dress like a celebrity doesn’t mean you should. Pastors must exercise and display modesty as to uphold the call to be wise stewards. Wealth isn’t bad, but the poor management of it can be. Especially when you’re the man who tells people to, “Follow me as I follow Christ.”

A post shared by PreachersNSneakers (@preachersnsneakers) on Mar 24, 2019 at 4:29pm PDT

Another celebrity pastor, Chad Veach, was featured in many posts. According to Fashionista, Veach reacted to one post but then deleted his comment: “Wanna know what’s crazy? I legit did not pay for one thing i am wearing [sic],” Veach initially commented from his verified account on the post. “Is that wild to you? that’s wild to me… Thanks for the shout out tho. You’re a blessing.”

The man behind the page, who says he has had “a relationship with Jesus for 21 years,” has no clear idea of what the future of this Instagram holds. He’s glad that people noticed all the same: “I just care about thoughtful discussion being had as a result of my posts and hopefully people’s lives are affected for the better.”