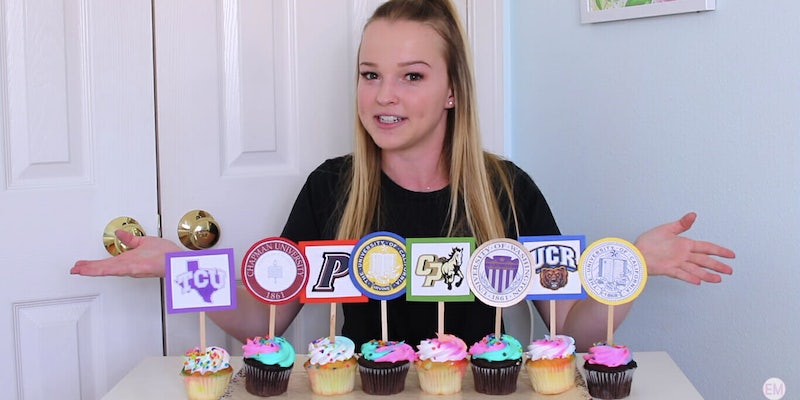 Teens are making reveal videos that show what college they’re picking. Should they be?

It's a controversial new trend.

First, high school kids had promposals where they asked each other to the prom with grand gestures. Now, they’re making college decision reveals a thing—no doubt taking after gender reveals and ESPN2 telecasts.

Much of the reveals regarding which college they decide to attend are staged for videos on social media. Several can be found on YouTube, and a mix of photos and videos are scattered on Instagram and Facebook, along with cake and apparel shops advertising products for this very purpose.

A quick search on these platforms shows that the college decision reveal is not entirely new. It recently began gaining ground on the internet again in light of the current college admissions season and yesterday’s trend piece in the Cut.

As the Cut observes, “Cupcakes are a popular prop, and YouTubers will stick little handmade flags into them representing the various schools they’re deciding between. They’ll then eliminate each cupcake…” One video involved “a YouTuber [who] goes as far as baking the letters of her college choice into the batter. She then cuts the cupcakes open and digs the letters out with her fingers,” the blog adds.

Some YouTubers are also sharing their college acceptance reactions, giving viewers a peek while they read acceptance (or rejection) letters from the colleges they applied to. Until recently, college decision reveals—and all the excitement and curiosity surrounding them—were pop culture events only as high school athletes choosing the college where they will play ball.

So what are these college decision reveals of student vloggers on social media for? Basically, it boils down to personal branding and signal-boosting their social media.

The negative side of college decision reveals

As with anything posted on social media, happy and celebratory college decision reveals have a dark side. At the very least, some find it in poor taste. Heather Doyle, a Florida mother of two current college students and a high school senior, told Today, “I just find it extremely obnoxious when people list every school they were accepted to. … Who cares? Yay, you!”

An editorial on Grown & Flown, a website and social media community for parents of teens and college students, went so far as to say the college decision reveals highlight economic inequality: “It’s also easy to acknowledge that this trend is yet another opportunity for people to be a tad insensitive. First of all, the indulgence of a college reveal party that is posted online is another in-your-face example of the disparity between the haves and the have nots.”

Last week, author and journalist Beth Kobliner wrote on her website how these posts could negatively affect young viewers who aren’t as fortunate. “What if a student got into only her ninth-choice school? What if her parents couldn’t afford for her even to apply to her favorite college, much less to throw an Instagram-worthy reveal party? For these kids, in-your-face videos of students seeming to get exactly what they want from life can create a vision of the world that can never match reality,” Kobliner noted. “Think about how much more depressing social media could be in the context of college application and acceptance seasons, already among the most nerve-racking, knot-in-your-stomach phases of a student’s educational life,” she wrote.

Kobliner also mentioned a New York Times expose on T.M. Landry, a school in small-town Louisiana, that went viral for videos showcasing its students opening acceptance letters from Ivy League universities. “The disconnect between reality and the world as seen on social media can lead to perverse outcomes. … [It turned out] Landry was falsifying transcripts and allegedly abusing students,” she added.

And following the college admissions scandal that more recently blew up, which unmasked rich parents who allegedly bribed their kids into prestigious schools, perhaps now’s really not the time for a college decision reveal trend, no matter how well-intentioned.