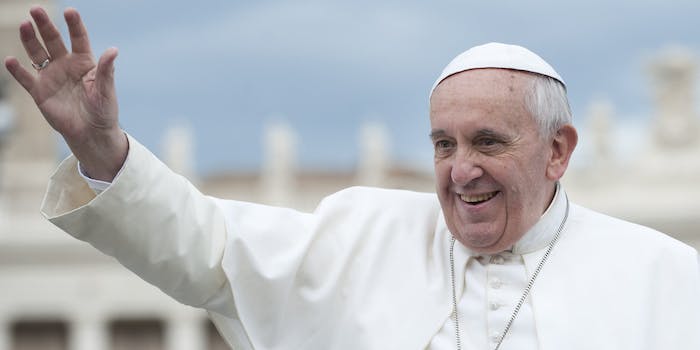 The video in question was part of a soon-to-be-released BBC documentary about seminarians at the Pontifical Scots College in Rome.

The footage showed the 83-year-old church head accepting the bottle of Oban 14 from the student priests during an event at the Apostolic Palace.

In a recent interview with New York Post, the documentary’s director Tony Kearney describes the pope as “down to earth.”

“He was really down to earth with them all [the student priests] and when they handed him the bottle, instead of just handing it to his assistant as he normally would with a gift,” Kearney told the newspaper. “He held it up and said ‘Questa e la vera acqua santa,’ which means ‘This is the real holy water.’”

Although shot last year, the story picked up traction as the documentary is set to air on Sunday.

The comment was reportedly meant as a “good-spirited joke,” but the Vatican quickly rushed into damage-control mode. It pushed for censorship, and the footage was ultimately axed from the film.

But whiskey seems to be a gift of choice for the Pope, as he has been on the receiving end of a bottle a few times over the years.

In was noted in Reuters that Queen Elizabeth gifted Pope Francis a bottle of Scotch whiskey at their first meeting in 2014.

And in 2018, Father Jim Sichko tweeted about giving the pope a bottle of aged Bourbon (whiskey made in the U.S.).

Apparently, the love of whisky has been part of the Catholic religion since the fourth and fifth centuries. Monks are actually the first to bring the art of distillation to Scotland. According to Men’s Journal, Dane Huckelbridge writer of the book Bourbon: A History of the American Spirit, Celtic monks called whiskey “‘Aqua Vitae.”

“It really was seen as something healing and miraculous, a true ‘water of life,'” Huckelbridge stated.