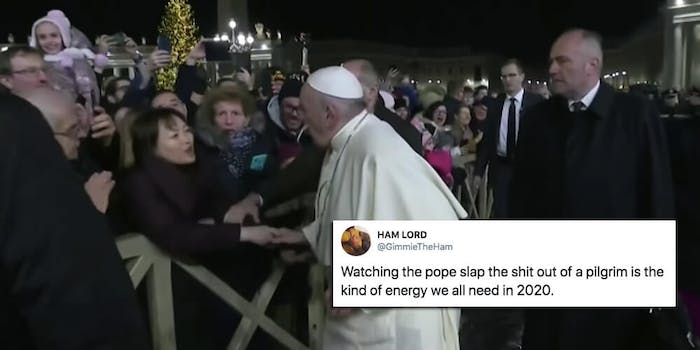 'A slap on the hand from the pope used to be just for pedophile priests.'

Pope Francis caught some flack from his flock after he was caught on video slapping away a woman’s hand. The woman was part of a large crowd gathered to see him on New Year’s Eve.

The head of the Catholic Church walked alongside the barrier in Vatican City, shaking the hands of worshippers waiting to catch a glimpse of him. The next woman in line grabbed his hand as he started to turn away to leave, and she yanked Pope Francis back towards her, trying to say something to him. The holy leader wasn’t having it and angrily slapped the woman’s hand until she let him go.

Only a few hours later, the pope denounced violence against women in his New Year’s Day speech, blasting the way women are treated throughout the world and calling for gender equality.

“Every form of violence inflicted upon a woman is a blasphemy against God, who was born of a woman,” Francis said. “Humanity’s salvation came forth from the body of a woman. We can understand our degree of humanity by how we treat a woman’s body.”

Pope Francis then apologized for getting slap-happy the night before, saying he set a “poor example.”

However, the video had already gone viral, and religious leaders whacking parishioners isn’t exactly an everyday event. As such, people had a lot to say about the meme-worthy moment.

2020 already off to a pope slappin’ start

“Keep hearing the pope slaps and i didn’t even know he had an album,” joked another.

This makes it sound like the pope got busted with heroin pic.twitter.com/AL9u3igCVZ

BREAKING: The @NFL says the Pope can still play this sunday , waiting for results of investigation. pic.twitter.com/P93ofvH3wf

Papalogist here. Grabbing Francis by the hand may seem like harmless fun but please remember that if you touch a pope his mother will reject him and abandon the nest.

Watching the pope slap the shit out of a pilgrim is the kind of energy we all need in 2020.

Of course, the incident also inspired commentary about the Catholic Church’s consistent mishandling of its abuse allegations.

“Where was this anger, visceral reaction, and swift response when priests and members of the clergy were abusing children?” one Twitter user demanded.

Yesterday, Pope Francis hit a woman's hand for grabbing him without his consent.

Today, he apologized "for the bad example given yesterday."

Where was this anger, visceral reaction, and swift response when priests and members of the clergy were abusing children? pic.twitter.com/7gQj2Ti6Fu

For people defending the Pope… I guess I get it. Who could forget the passage in the Bible where crowds lined up for Jesus and when they touched him, he would angrily smack them and walk away quickly with a grimace on his face.

While most of the reactions focus on Pope Francis himself and his questionable (or heroic, depending on who you talk to) choices, it’s important not to forget the other party in this situation—namely, the person on the receiving end of The Slap.

It’s very funny that there is a lady out there today who is thinking, “Fuck, now when I die I gotta explain why I got slapped by the Pope”