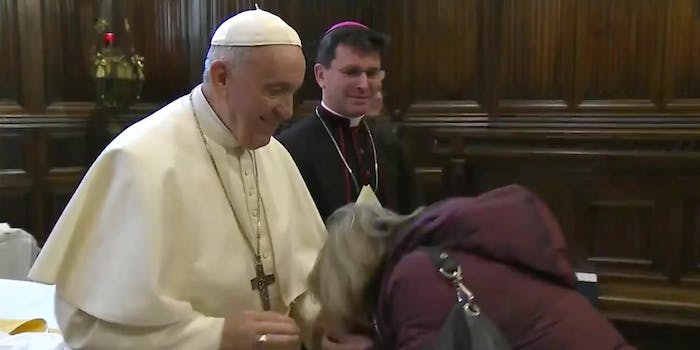 He ain't having it.

Adherents of the Catholic faith were perplexed this week after Pope Francis was seen on video denying his followers attempts to kiss his ring.

The longstanding papal tradition, which involves members of the church kissing rings worn by bishops, cardinals, and the pope, was rebuffed by Francis on Monday during a visit to Loreto, Italy.

The awkward video, which went viral on Twitter, shows Francis repeatedly pulling his hand away as a long line of devotees react confusedly.

Pope Francis really doesn't want anyone kissing his ring.
This from today, after Mass … pic.twitter.com/CZUO8ppNfo

The motive behind the Pope’s actions appears to be unknown, but the BBC has speculated that Francis was merely attempting to keep the line moving. After initially allowing 41 people to carry out the kissing gesture, Francis allegedly became impatient.

“Francis may not enjoy his ring being kissed, but it’s inaccurate to say that he rejected all those that day who attempted the gesture,” the BBC wrote.

Some Catholics decried the move, arguing that the pope likely inflicted “heartache” on all those denied the ability to smooch.

I’d be CRUSHED if the Holy Father ripped his hands away like that.

Papa Benedict smiled and made eye contact with me when I was a University student is Rome. It was so special and I treasure that memory.

Th memory of this will cause heartache for those Catholics forever.

Others hailed the moved as proof of the Pope’s down-to-earth nature.

What Pope Francis is demonstrating is that he is just a man like every single one of us, that tradition of kissing his ring puts him on a pedestal that no one deserves but God. Now I see that whatever he does will be criticized even if it's for the advancement of the church

And many, many others questioned why this dude deserves ring-kissing rights to begin with.

I can only express a feeling of genuine pity for these people trying to kiss his ring.

Of course, no bizarre viral video would be complete without some meme reactions.

He’s just trying to make sure this doesn’t happen. pic.twitter.com/oTBxpb6Wqt

Pope about to lose it pic.twitter.com/dHEGQaVifa