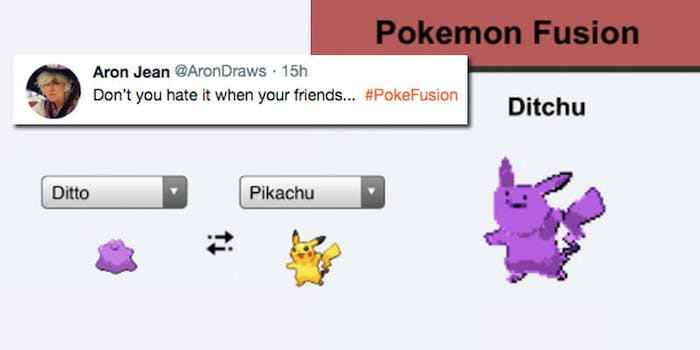 This is what nightmares are made of.

If you’ve played any Pokémon game, you know the torment of languishing over your choice of fighter. Who will be your first companion on your long journey to becoming a Pokémon master? The choice is generally limited to one of three options, but a fanmade website site has Pokéfans envisioning a different world.

Pokémon Fusion lets you imagine what might happen if two different species were smushed together into one monstrous hybrid. The generator site has existed for about seven years, according to Forbes, but went viral with #PokeFusion memes on Twitter over the weekend.

Because the internet always takes things the extra mile, people are using the site to determine what their “government assigned” starter fusion Pokémon would be.

So what if hypothetically, Pokémon were real, and we were all swinging by Professor Oak’s lab before starting our journeys to become the very best, like no one ever was, but a horrible scientific mishap occurred the night before, fusing various Pokémon together? The starter assigned to you as everyone quickly evacuated Pallet Town would be the first one that pops up when you visit the site.

As is always the case when it comes to Pokémon, some of the results—from Squirtqueen to Jigglychoke—are… interesting.

Despite the strange results, fans are feeling an immediate kinship with their new starters.

The exercise in mad science has also inspired a lot of fan art, as Pokémon trainers commit to the idea of their bizarro buddies.

What ungodly creation have I made?

It’s a little jarring how close some of these guys come to looking like real Pokémon. They’re obviously not originals, though we could totally envision these getting introduced in a later version of the game.

Of course, it’s unlikely anyone from the pixelated crossbreeding experimenting will actually make it to the game. But you can still find out your own PokéFusion starter here and imagine the journey you could have together.

Just be careful. You never know what you might get. Some of these hybrids are definitely going to give us cartoon-themed nightmares. Forever.

Maybe we don’t really need to catch ’em all.