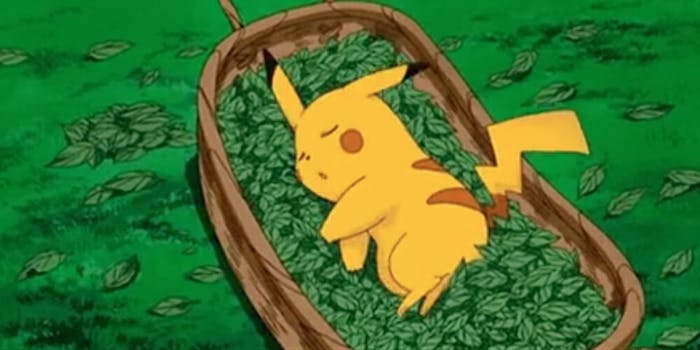 Pokémon Sleep is a game that encourages you to curl up in bed.

Pokémon Go has been dominating the world this year. Now the Pokémon Company wants to dominate our sleep cycle because it’s rolling out a new app called Pokémon Sleep.

At a press conference in Tokyo on Tuesday, the Pokémon Company announced some new Pokémon-themed mobile apps.

Perhaps the strangest of the announcements was Pokémon Sleep: an app that “aims to turn sleeping into entertainment by having a player’s time spent sleeping, and the time they wake up, affect the gameplay.”

Concerns about dystopian surveillance states aside, it’s a peculiar take on a brand that has made its most recent waves by encouraging people to get out of the house rather than curl up in bed.

The game works as a sleep tracker, monitoring your sleep cycle and encouraging you to get some dang rest. It works in tandem with Pokémon Go and the Pokémon Go Plus + tracker.

As you can imagine, the internet has wasted no time in riffing on the whole idea.

There’s a Pokémon Sleep meme for those who enjoy putting off addressing their depression with some good old fashioned shut-eye.

These folks raise a valid question: Which Pokémon would you sleep in bed with?

@ all Poketubers I got an idea for you.
Top 5 Pokemon I Can't Wait To Sleep With pic.twitter.com/Dq8vIk5sjj

Of course, it’s not Pokémon if it’s not at least a little cute.

The Pokemon Sleep I want pic.twitter.com/X7wplv3sSq

Some people are just never satisfied with only one game.

alright, it ate at me all day how low-effort that original Pokemon Nap image was because i was trying to be the first one to get the joke out, so i did it more properly this time. this is just for my own satisfaction really lmao pic.twitter.com/f0v4dFql4N

Then there’s all the rest.

this is the Pokemon Sleep experience pic.twitter.com/mFTyhQGdyd

Me before: "Sleep is for the weak!"
Me now: "Welp, time to hit the hay!"#PokemonSleep pic.twitter.com/TFhmIH5Dtu

Boring the audience to sleep while announcing a new sleep product is some galaxy brain marketing pic.twitter.com/FDPGLp1ZR1

Now if you’ll excuse me, it’s time for my scheduled mid-workday nap. Pokémon Sleep is coming in 2020, so wake me up then.