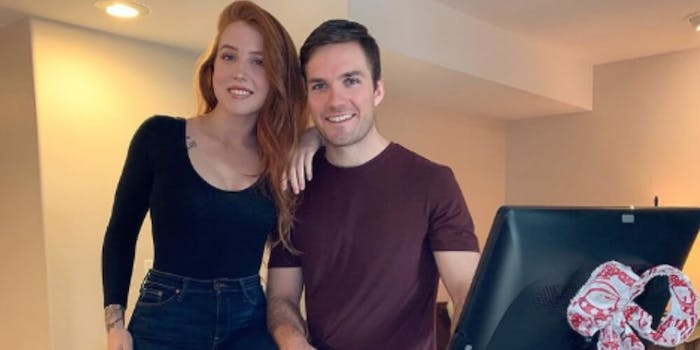 The ‘Peloton husband’ actually got his girlfriend a Peloton for Christmas

'Here's hoping this goes over better the second time.'

The Peloton husband–whose real name is Sean Hunter–seems to have missed all the backlash over his recent Peloton commercial, because he got his real-life girlfriend none other than a Peloton bike for Christmas.

The actor posted a photo with his girlfriend and the bike on his Instagram account on Wednesday. Hunter, who uses the Instagram moniker @pelotonhusband, captioned it, “Here’s hoping this goes over better the second time…Merry Christmas to my actual girlfriend (pls don’t leave me).”

Hunter’s followers saw the humor in the post and the comments are full of positive responses. Peloton’s Instagram account even commented, “Looks like a successful Christmas gift to us! We hope you love it, and we’re so glad you’re a part of the Peloton family!”

Hunter appeared in a recent Peloton commercial as a husband who bought his wife a Peloton bike for Christmas. The commercial got slammed online for not only the extravagant lifestyle Peloton is known for portraying but also for the way the woman so eagerly claims exercise equipment she likely didn’t ask for changed her life. The ad went viral, and nearly everyone who saw it was quick to express how cringey it felt.

Peloton quickly defended its advertising. “We constantly hear from our members how their lives have been meaningfully and positively impacted after purchasing or being gifted a Peloton Bike or Tread, often in ways that surprise them,” a Peloton spokesperson told CNBC. Peloton also released three positive emails and a Facebook post from users to “prove” that Peloton truly does change lives.

As for the Peloton wife, whose real name is Monica Ruiz, she has since starred in a commercial for Ryan Reynolds’ gin company, Aviation Gin, and will appear in an episode of The Bold and the Beautiful, according to TMZ.