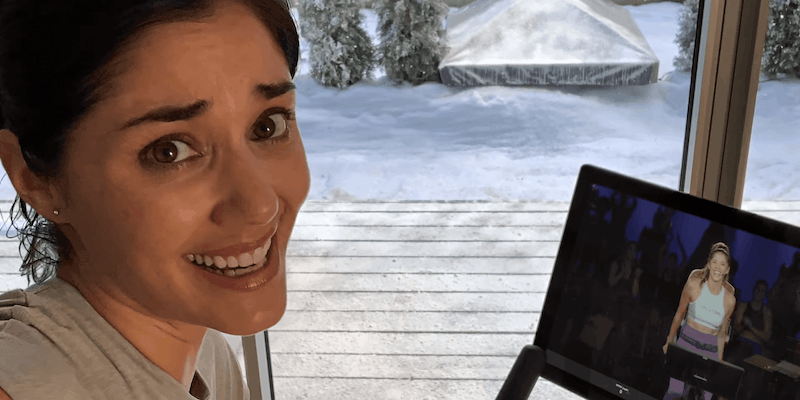 This Peloton ad is the stuff of holiday nightmares

'Peloton' means a group of riders, but this woman seems so very, very alone.

You might remember Peloton as the stationary bike company whose ads were mocked for their over-the-top portrayal of their buyer’s extravagant lifestyle. The ads always show the bikes placed in what looks to be multimillion-dollar homes, or $5,000-a-month luxury apartments. It’s all giant windows, hardwood flooring, and granite countertops.

I took my Peloton bike to Europe and used it on the balcony of our $2,000/night Airbnb and honestly I felt like I was flying over London, you should try it pic.twitter.com/sVjdO78MRV

With a starting price of $2,245 (plus another $39 a month for the video classes), the bike is certainly designed to cater to people with a large amount of expendable income. But that doesn’t make the commercials seem any less ridiculous to those of us who don’t own mountain chalets or summer homes in the Hamptons.

The company’s latest ad not only doubles down on this premise but adds a new twist. Now the bike is not only a symbol of your wealthy station, but it can also change the course of your life.

The new video shows a woman receiving the bike from her husband as a Christmas present. “A Peloton!?” she exclaims in both joy and disbelief. We then see our hero aboard the bike preparing for her first ride. “I’m a little nervous… but excited.”, she says, referring to riding a bike that will literally not leave her living room. We are then treated to a montage of what appears to be the social media chronicling of her Peloton journey.

At the end of the year (spoiler alert) she shows her husband the video and proclaims, “a year ago, I didn’t realize how much this would change me. Thank you.” As a bonus, the whole thing is set to the 1999 hit “She’s so High” by Canadian pop-rock sensation Tal Bachman. It’s pretty heavy stuff.

The internet proceeded to collectively roll its eyes harder and faster than the fictional woman could ever hope to pedal her legs. As of this writing, the YouTube video has mere 235 positive reactions compared to a whopping 3,600 negative. Disappointingly, yet not surprisingly, comments have been disabled.

No worries, though. Twitter was happy to fill in.

Sorry to shake things up but I'm excited to announce I'm throwing my hat in the ring and joining the presidential race and running on the single issue platform to jail everyone involved in the pitching, scripting, acting, shooting, and approval of the Peloton ad.

I really thought Christmas music before Christmas was the worst, then I saw a Peloton ad. pic.twitter.com/GwqwbVe7wH

this ad is making me lose my goddamn mind pic.twitter.com/GXgypRkFOg

The ad was criticized on multiple levels, including that, despite her assertion about how much the bike has changed her, the woman looks exactly the same at the beginning and end of the video. Her husband also caught a lot of flack for buying his wife exercise equipment which, given her shocked reaction, she didn’t ask for.

What a difference a year made. pic.twitter.com/OhigcQ4cJ7

when my husband gets me a Peleton for Christmas …….. pic.twitter.com/Z2d3ewMhPu

Although perhaps there is a way the whole thing makes a bit more sense.

The biggest twist of all occurred, not in the video, but in real life. The ad was so universally hated it ended up going viral. According to MarketWatch, the company’s stock soared 47% in the past month. How much of this was due to the commercial is anyone’s guess, but it certainly doesn’t seem to have hurt their sales. Unlike their riders, Peloton seems to actually be going places.