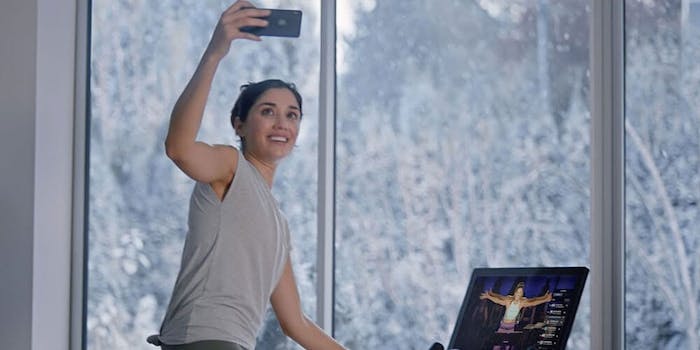 The next time you go to mock Peloton, just remember that Heather on Facebook totally loves its advertising.

Exercise company Peloton responded this week to criticism of its holiday advertisement by pointing to three emails and a Facebook post as proof that its widely mocked video wasn’t all that bad.

The company had already been dragged online in January after a viral Twitter thread highlighted the absurdity of its print advertising campaign, which showed its $2,245 stationary exercise bike being used in nothing but extravagant locations.

Despite being widely ridiculed, Peloton once again relied on the over-the-top theme with the release of a holiday video late last month. An overly excited woman can be seen extolling the virtues of the almighty Peloton as it seemingly changes her life like nothing else ever has.

The cringeworthy ad, released on YouTube, has not only received more than 12,000 downvotes, as compared to just 4,000 plus upvotes, but was once again used to mock the company on Twitter.

in all seriousness the real version of this is the dumbest fucking ad. she is gorgeous and skinny, then her partner gives her an exercise bike, and she uses it a ton, for a year, but looks exactly the same (gorgeous and skinny) and at the end insists she's "changed" what and how https://t.co/ZXLcyCdHzY

The mockery was apparently enough to drop the company’s stock by 6% during Thanksgiving week, but that’s not stopping Peloton from defending its prestigious bike.

In a statement to CNBC, a company spokesperson argued that Peloton customers are absolutely praising the awesomeness of their bikes regardless of what its detractors are saying.

“We constantly hear from our members how their lives have been meaningfully and positively impacted after purchasing or being gifted a Peloton Bike or Tread, often in ways that surprise them,” the spokesperson said. “Our holiday spot was created to celebrate that fitness and wellness journey. While we’re disappointed in how some have misinterpreted this commercial, we are encouraged by—and grateful for—the outpouring of support we’ve received from those who understand what we were trying to communicate.”

But Peloton didn’t stop there. The company even provided CNBC with three emails and a Facebook post from alleged customers to showcase just how amazing their lives have become since bringing Peloton into their homes.

“I think it is a thoughtful commercial,” one email states. “The first time I saw it I thought ‘That was a sweetly portrayed ad.'”

So the next time you go to joke about Peloton’s advertising choices, just remember that Heather on Facebook totally loved the ad.