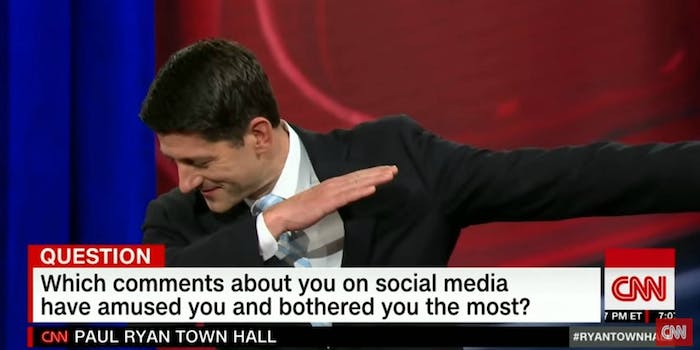 House Speaker Paul Ryan, when he’s not interested in defunding Planned Parenthood or getting told off by Golden Globe attendees, is hip with the times.

Dabbing? Sure, Ryan knows all about it.

“I actually do know what a dab is, just for the record,” Ryan said Thursday during a CNN town hall event. “It is this.”

Then, he proceeded to show everybody exactly what this is.

At least Ryan is a quick study. Ten days ago, during a congressional swearing-in ceremony, Ryan seemed confused when Kansas Rep. Roger Marshall’s son dabbed when it was his dad’s turn to pose for photos.

Later, Ryan admitted he didn’t know about the dabbing meme.

Twitter, predictably, wasn’t impressed with Ryan’s attempt to make himself part of the cool crowd (even though Cam Newton, who helped turned dabbing into a mainstream phenomenon, quit cold turkey last June, a move that somehow didn’t seem to kill off the dance craze).

I’ve decided to make some changes in my life. Today I saw Paul Ryan dab. Dabbing is dead and just like the 2008 economy, the GOP killed it.

As for the confusion with Marshall’s son, Ryan is sticking with this story that he thought he was sneezing. “That’s not dabbing in my opinion,” Ryan said Thursday.

If Newton couldn’t end dabbing, perhaps the latest offering from Ryan will effectively kill it. Kind of like Obamacare.