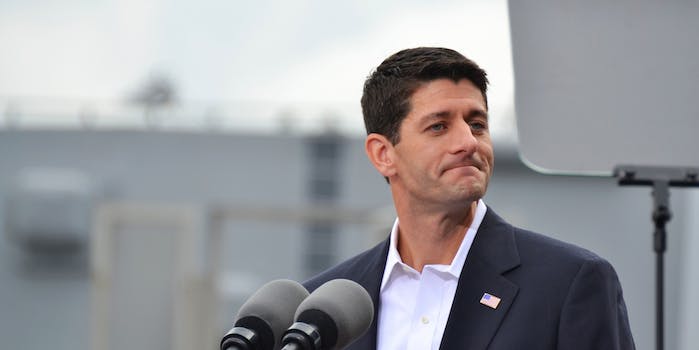 This is the same bill it plans to defund Obamacare with.

Paul Ryan told reporters today that the House will vote to defund Planned Parenthood in the same bill it will use to repeal Obamacare. In 2015, Republicans in Congress voted on a bill that would prevent Planned Parenthood from receiving $500 million in federal funding but were blocked by Democrats. Now, in a Republican-controlled House, Republicans just need to rouse a majority to pass the bill.

Repealing Obamacare was a cornerstone of Trump’s campaign, and in March, Trump said women who get, and doctors who perform, abortions should be penalized. Many in Trump’s administration have also been vocal about their mission to defund Planned Parenthood, including Tom Price, Trump’s health secretary pick who believes access to contraception is a threat to religious freedom.

Democrats, however, have condemned any moves to defund the healthcare organization, which millions of women rely on for basic reproductive needs, including Rep. Barbara Lee, Rep. Jan Schakowsky, and Sen. Bernie Sanders.

In the same bill, @SpeakerRyan wants to both repeal the #ACA & defund Planned Parenthood – leaving many women with ZERO healthcare options. https://t.co/ci0qqiClmp

.@SpeakerRyan the women of America are watching. You will regret any attempt to defund Planned Parenthood https://t.co/pc37ND0fLd

If Republicans want to throw millions off insurance, cut Medicare, defund Planned Parenthood—we will not let them get away with it.