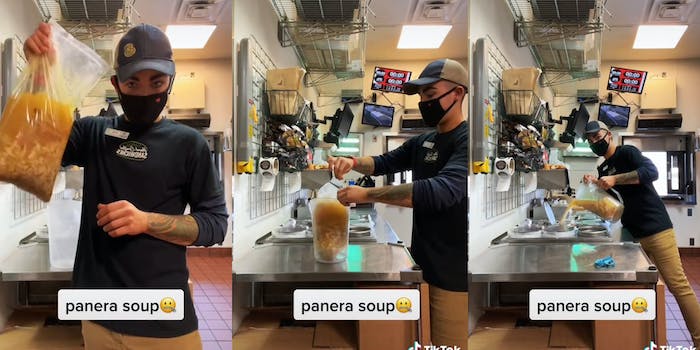 A Panera worker exposed company’s pre-made, pre-bagged soup in a now-viral TikTok video. In the clip, the worker opens a sealed plastic bag of pre-made soup and pours it into a soup tureen to be served.

The video features the TikToker, @ohana_trender, in a New York Panera kitchen refilling the location’s soups. He takes out a pre-made plastic bag of an ambiguous-looking yellow liquid filled with vegetables and noodles, cuts a corner off, places it in a pitcher, and pours the steaming (chicken noodle?) soup into a tureen to be served to customers.

This is not the first time Panera has been exposed on TikTok for using pre-made or frozen foods.

Posted three days ago, the video has over 5,800 likes so far and the comment section is divided. Some commenters are miffed their Panera soups come out of a bag rather than being cooked in the kitchen of each individual location (although ghost kitchens are a widespread practice, especially in the age of delivery).

“So y’all charging those kinda prices for WHY,” says @yuh.1_.

Others are unsurprised and ride hard for Panera soups.

“Y’all really think the soup is cooked from scratch at every store?” @ghostisdope commented.

“I had a friend that worked for Panera and for my birthday she brought me a bag of broccoli cheese soup. It’s my favorite. Best bag ever!,” commented @riojade913. @ohana_trender responded, “Right?”

The Daily Dot has reached out to @ohana_trender and Panera.