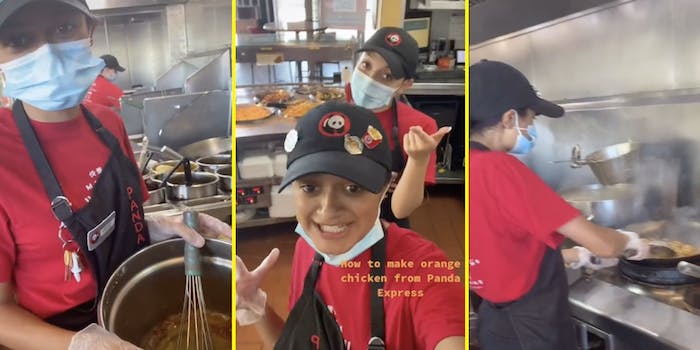 A TikToker who appears to work at a Panda Express created a video that reveals how to make the chain’s orange chicken, and it’s delighted a number of viewers since going live Sunday.

The video, from the @theycallmevero_ account, has attracted more than a half million views in its first day on the platform. Judging from the comments, people are thrilled that the TikToker has taken them into the Panda Express kitchen to reveal how the popular dish is made.

The TikToker takes viewers through a step-by-step process, and to many people’s surprise, Panda Express actually uses a wok in making the dish. She also shows how to mix the orange sauce with the chicken, showing off some deft, one-handed wok flips in the process.

That caught the attention of some commenters. “That flip is def a flex!” one said. “Because I def would’ve burned the place down.”

“Dude,” she responded. “Istg I could barely flip before I learned.”

Another commenter, joining the conversation, noted, “Okay, also lifting the FULL fryer basket with one hand was pretty impressive.”

“THANK YOU!!” she exclaimed. “I only had 1 day of training to learn how to cook all the food and I’m just grateful for the learning process.”

Another commenter observed, “If I tried to flip the chicken I would be wearing it.”

The TikToker, definitely engaging with her audience, responded in all caps, “THAT WAS ME THE FIRST TIME.”

Someone else pointed out that there should also be cooking wine as part of the recipe; she responded that “for religious reasons,” as her location is right across the street from a church, they don’t cook with wine.

Several users who claimed to be ex-Panda Express employees chimed in to comment on how the TikToker appeared to be fun a co-worker, with one noting, “Girl, if I worked at Panda with you I wouldn’t have quit.”

One even appeared to be shooting his shot, writing, “When she has a good sense of humor and can cook.”

The TikToker posted her video with an accompanying note, “Let me know if y’all want more Panda Express content.” It appears that quite a few people do.

Someone even specifically asked, “How do you guys make the honey walnut shrimp?”

The Daily Dot has reached out to @theycallmevero_.