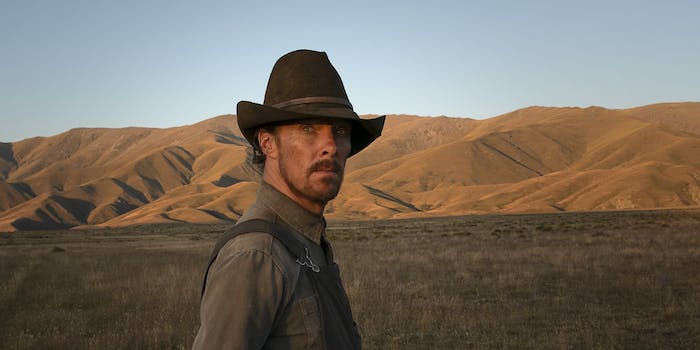 The Power of the Dog/Netflix

Review: Benedict Cumberbatch is chillingly menacing in ‘The Power of the Dog’

Benedict Cumberbatch and Kirsten Dunst star as a pair of unlikely enemies in The Power of the Dog, trapped together by circumstance. Dunst is Rose Gordon, the new wife of landowner George Burbank (Jesse Plemons), marrying up after a life of running a rural restaurant for itinerant cowboys. Cumberbatch plays her brother-in-law Phil, a tough, cruel man who resents her interference in the male-only world of the Burbank family ranch. He resolves to make her life hell, singling out Rose’s awkward teenage son Peter (Kodi Smit-McPhee) as a secondary target.

The Power of the Dog

After a decade of prioritizing middle-of-the-road British historical dramas and watered-down echoes of his breakout role in Sherlock, Cumberbatch is electrifying in The Power of the Dog. Cold-eyed and watchful, Phil Burbank is a frightening presence whose complexity reveals itself at a slow and steady pace. Dunst plays a more sympathetic role as Rose, a nervous woman with no capacity to outwit or fight back against Phil’s torments. One memorable scene sees Rose try to practice her new piano (an expensive and unasked-for marital gift) while Phil taunts her by playing the banjo. He’s casually adept with this instrument of cowboy music, while Rose struggles to master the grand piano, a symbol of her husband’s wealth. This interplay is simultaneously comical and menacing—and, crucially, impossible for Rose to complain about. How can banjo-playing be seen as a threat?

As we’ve come to expect from Jane Campion, The Power of the Dog is beautiful, introspective, and psychologically astute. Much time is spent on the rolling landscape and the rough everyday tasks of life on the ranch. Phil Burbank thrives here, and to a certain extent, he enjoys his life. But while he is by nature a deeply unpleasant person, like so many bullies, his sadism originates with poorly-buried fears and desires.

In his post-Radiohead career as a film composer, Jonny Greenwood is best known for his lush, sweeping orchestral scores for Paul Thomas Anderson movies including Phantom Thread. For The Power of the Dog, he brings an appropriately sparse tone for the Montana wilderness. Sometimes the score follows the easy gait of a lone horse trotting along a mountain path. Elsewhere, the music lingers and loops ominously as Phil Burbank surveys his victims.

By the halfway point of The Power of the Dog, you’re certain that violence will occur. But when and how is impossible to guess. Tightening the screws with subtle menace, Jane Campion finds new angles on that classic Western theme of toxic masculinity, rewarding patient viewers with a story that remains unnerving unpredictable to the end.