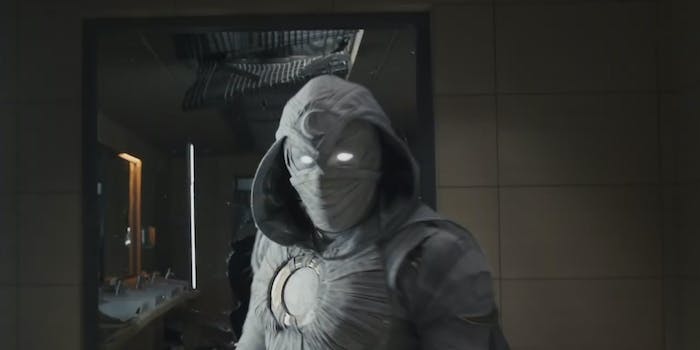 People are comparing him to Dick Van Dyke in 'Mary Poppins.'

In the trailer, Isaac’s character Steven Grant speaks with a rather dubious English (kind of Cockney?) accent. He also suffers from a sleep disorder and spends most of the trailer in a state of panic, hallucinating a supernatural entity and losing his grip on reality.

The twist is that “Steven Grant” isn’t a real guy. He’s an alternate personality of the show’s true protagonist Marc Spector, whose dissociative personality disorder is a key part of Moon Knight’s origin story. The show’s depiction of mental illness is sure to be divisive, but right now most people are just commenting on the accent, which they claim has noticeable Dick Van Dyke in Mary Poppins undertones.

A few fans also made the bold argument that Isaac’s English accent is sexy, but that probably has more to do with Isaac’s overall vibe than the plausibility of the accent itself.

While the accent is already inspiring plenty of mockery (both affectionate and genuinely disbelieving), there may well be a narrative explanation for why it sounds the way it does.

In the comics—and presumably in the show as well—Marc Spector is American. And while Steven Grant is a fully-formed personality with a life of his own, he’s still the product of Marc Spector’s brain. He didn’t come by that English accent naturally. This means Isaac’s accent may be intentionally bad because it’s a false American interpretation of what an English guy sounds like. There might also be even more voices in play because Marc has at least one other prominent personality in the comics: Jake Lockley, a taxi driver.

If the accent is indeed a bait-and-switch, then it’s an amusingly wild move for the MCU. For now, most viewers watching the trailer will just assume that Steven Grant’s weird accent is “real” and that Isaac’s performance is 100% sincere. And who knows! Maybe it is!