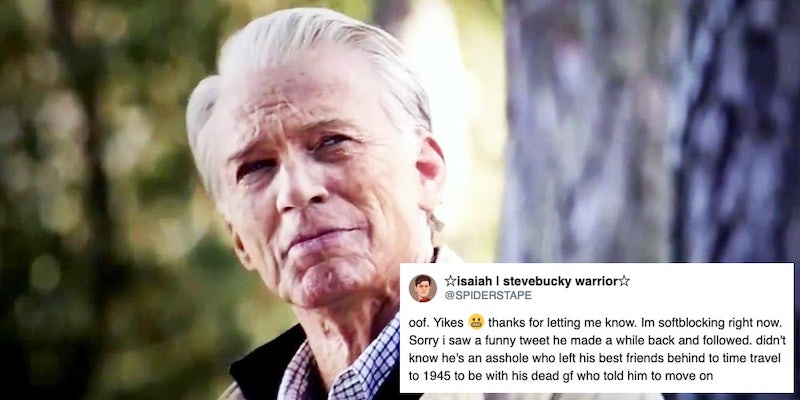 Ever follow or befriend someone on social media only to later find out that they have a history of being capital-P problematic? Fear not, it’s happened to the best of us–and now it’s become even more wholly relatable as the “Oof. Yikes 😬 … Softblocking, now” meme.

Soft-blocking, for the uninitiated, is the practice of blocking, then quickly unblocking someone on Twitter. This forces the person to unfollow you, but without the added drama of the dreaded permanent Twitter block. As a result, both parties ostensibly go about their merry ways with none the wiser. Consider it the “Homer slowly backing into the bushes GIF” equivalent of distancing yourself from someone on the platform.

The “Oof. Yikes 😬” meme plays off of that scenario, however, the punchline in this instance is that the subject of the soft-blocking tends to be a fictional character or villain from literature, TV or film.

According to KnowYourMeme, it originated on July 20 when Twitter user Turing Police tweeted the following joke about the Japanese manga series JoJo’s Bizarre Adventure.

“Oof. Yikes 😬 thanks for letting me know. I’m softblocking him right now. Sorry I saw a joke tweet he made a while back and followed,” they wrote, adding: “Didn’t know he’s been trying to end your family’s bloodline for seven generations so that his malign magickal influence can ravage the world unchecked.”

The tweet was a reference to the character villainous stepbrother Dio Brando—one of the main antagonists of the series.

But as the tweet began to go viral, others picked up on loose variations of the generic copypasta setup: “Oof. Yikes 😬 thanks for letting me know. I’m softblocking him right now. Sorry I saw a joke tweet he made a while back and followed…”

As you can see from the handful examples below, the joke works in the context of everything from Captain America’s big decision in Avengers: Endgame and Willy Wonka to Edgar Allen Poe’s short story “The Cask of Amontillado” and The Phantom of the Opera.

Other humorous, more offbeat examples riffed off of the comic strip character “Garfield” and the lyrics to Leonard Cohen’s “Hallelujah.”

While Twitter has always been a platform for irate fans to express their ire, soft-blocking fictional characters is certainly a new one. If nothing else, the cast of should just be thankful this meme wasn’t a thing during the final season.