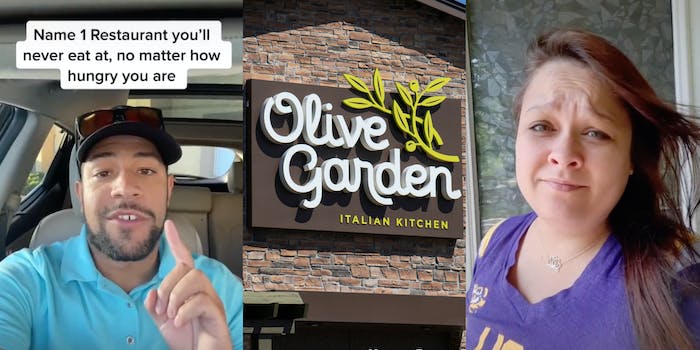 ‘Just trust me’: Ex-Olive Garden worker says she will never eat there—‘no matter how hungry’ she is

If you had to choose one restaurant that you would never visit again, no matter how hungry you were, which would it be?

This is the question posed by TikToker @zekecieslak, who started yet another dueting TikTok trend. He asked users to share their least-favorite restaurants, and one participant’s answer is raising eyebrows.

User @spookyshanny provides a short, sweet, and tantalizing answer: Olive Garden. She gives very little reasoning for her answer, other than that she “worked there for 10 years.” And yet, her reply has gone viral with more than 2.1 million views as of Wednesday morning.

“There’s a reason you feel like shit after you eat there,” @spookyshanny says. “Just trust me. Don’t eat there.”

People in the comments, no longer yearning for breadsticks or never-ending salad, were hungry for answers. They littered the comments section with requests that @spookyshanny “spill the tea,” but she has yet to fulfill their demands via a storytime.

A number of self-described current and former Olive Garden employees weighed in in the comments, mostly disagreeing with @spookyshanny’s take. As noted by @brat715, “all franchises are different.” You may get a completely different experience at one franchise versus another due to different management, staff, and cleanliness protocols.

Another self-described former worker said she “loved” working at Olive Garden. “Ours was super clean and had great service,” @kellsfin wrote. “I think it depends on the town.” (It’s unclear what location @spookyshanny worked at.)

@spookyshanny is mostly keeping quiet about her reasons for calling Olive Garden out, but in response to one commenter she noted that “the salad is the worst part of the story.”

She told another user that “when you order chicken… its not chicken.”

According to @spookyshanny, “about 8 years ago,” Olive Garden changed its recipe for chicken to “mystery meat.” Some current employees pushed back on this notion, but @spookyshanny is standing firm by her claim. There doesn’t seem to be much to back this idea up, however.

Most health and food publications seem to agree that most—but certainly not all—of Olive Garden’s food is reasonably healthy. Menu items like the loaded pasta chips and meatball pizza bowl may be very high in carbohydrates, but there are no claims out there—except @spookyshanny’s—that Olive Garden serves anything but real meat in its dishes. Other menu items, like the iconic salad and breadsticks, tend to get rave reviews. In fact, dozens of imitation recipes aim to capture just a little bit of that Olive Garden magic.

@spookyshanny is not the only one in the anti-Olive Garden camp, she was joined by several other Olive Garden detractors on TikTok. Arby’s and Chili’s were also popular answers.

The trend seems to be cathartic for many former restaurant employees, but it comes at a price. All the tales of fake food, poor cleanliness protocols, and bad staffing have turned some people off from eating out at all.

One commenter proclaimed: “After reading these comments I will no longer be eating out.”

We attempted to reach out to @spookyshanny, but she only accepts message requests from friends. We’ve reached out to Olive Garden.