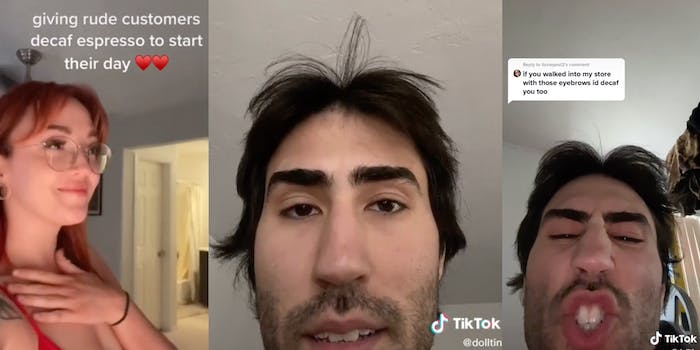 'I decaf-ed so many rude people. I would decaf people just if I felt like it.'

A TikToker who claims to be a former Starbucks worker admitted to giving customers decaf coffee “just if (he) felt like it” in a viral video that is garnering mixed reactions.

TikTok user @dolltin shared the video with his more than 38,000 followers on Monday.

He was responding to another barista’s video, in which she admitted to giving rude customers decaf coffee when they would order caffeinated beverages—something most viewers were on board with.

TikToker @dolltin stitched her video to say the claim is “100% true.”

“I worked at Starbucks for two years; I decaf-ed so many rude people,” he says. “I would decaf people just if I felt like it.”

He even says he would give people decaf coffee if they said the word “croissant” a certain way while ordering.

People have mixed reactions to the video. Many think his actions are justified considering how some customers treat food industry workers.

“People in the comments mad they have to treat employees like real people,” wrote one.

However, many take issue with the fact the worker also allegedly gave decaffeinated beverages to non-rude customers.

“As someone who needs caffeine for medical issues this kinda makes me feel icky,” said one person. “Like fck those rude ppl but uhhhhhh.”

Other comments seem to suggest this tactic is fairly common among baristas and bartenders.

“A lot of people in the comments need a decaf,” wrote one user.

“Some of y’all have never worked fast food or retail and it shows,” wrote another. “I probably would have done the same.”

“Wait till they find out bartenders leave out their alcohol in their drinks for the same reason,” wrote a third.

The TikToker has made several videos responding to the criticism.

In a followup video, he said that he wouldn’t discriminate against people who have a “French accent” or those who are “just French or whatever” but that he took issue with non-French speakers who pronounced croissant in a French way.

In another video, he contradicted himself by saying that he “wouldn’t just decaf anybody” before saying, “Yeah, I would do it like ‘randomly’ if I could tell you were shitty.”

He added that he wouldn’t give a “genuinely nice person” decaf if that wasn’t what they ordered.

The Daily Dot has reached out to @dolltin.