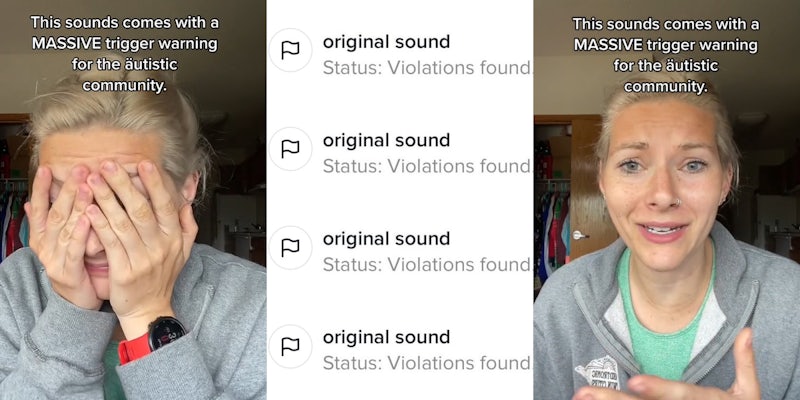 'Most of us had to turn our comments off from our videos calling out the sound.'

An autistic TikToker has reported a TikTok sound that is ableist and trivializes sexual assault to TikTok four times. Even though TikTok has told her that the sound violates its community guidelines each time, the sound is still available for use on the app.

Ashley Daniels, who has almost 100,000 followers on TikTok and regularly posts about her autism diagnosis and how her autism manifests in her daily life, made a video calling out a sound that includes a man’s voice saying “you will be brutally molested by 16 autistic clowns.”

The sound has been used over 15,000 times on TikTok, mostly to make jokes about fear-mongering. For example, TikToker @britneyy.official used the sound to joke about how her dad would respond when she asked him to have a sleepover—the implication being that if she had a sleepover, she would be “brutally molested by 16 autistic clowns.”

In her TikTok about the sound, Daniels is seen crying while she tells viewers that the existence of autistic people is not a “joke” and that the sound is “so fucking gross.”

“Non-disabled people think that part of the sound is so funny that they’re making jokes about it thinking autistic people aren’t fucking watching those videos,” Daniels says in her TikTok. “We’re watching.”

The sound was originally posted by Damien Salinas (@damien_officiall) as part of a TikTok that parodies Christian fear-mongering. In the video, Salinas says that “heaven is real,” and that non-believers will go to hell, which includes being “brutally molested by 16 autistic clowns.”

In an interview with the Daily Dot, Daniels said that when she first heard Salinas’s sound, she was “devastated.”

“It hurt to know that someone was making light of sexual abuse and using autistic people to make ‘shock humor,'” Daniels told the Daily Dot, referencing that 9 out of 10 autistic women are victims of sexual assault. “I unfortunately am an autistic survivor so it really hit me differently and that’s why I reacted in the way I did.”

Daniels’s video about Salinas’ sound went viral—at time of publication, Daniels’ video had over 1.5 million views—but she told the Daily Dot that she had disable comments on it because of the invalidating hate she received. Some commenters told her to calm down, while others said that Daniels and other autistic people should be killed via eugenics. Daniels also said she received death threats via email, her email “was sent to multiple law firms to arrange [her] will,” and that people sent her money on CashApp in order to make fun of her.

“I’m not the only autistic creator to receive this abuse for calling out the sound,” Daniels told the Daily Dot. “Most of us had to turn our comments off from our videos calling out the sound because of the gaslighting comments.” TikTokers @ellaellaw—who identifies as autistic—and @cuppajoey both have videos about Salinas’s sound on which the comments are turned off.

She also told the Daily Dot that she reported Salinas’ sound to TikTok four times. Each time, TikTok got back to Daniels affirming that the sound does violate its community guidelines, shown in a screenshot Daniels shared with the Daily Dot. She also said that the sound was taken down at one point, and then put back up on the app.

TikTok’s community guidelines include a section on “hateful behavior,” which outlines that content that “dehumanizes and individual or group” based on a list of attributes, which includes “disability.”

“I feel TikTok is deeply responsible for the abuse I’ve received,” Daniels told the Daily Dot. “I as well as many other autistic creators who called out the extremely violent ableism of this are still feeling the impact of the sound and none of what we went through and are still going through will ever be OK.”

The Daily Dot has reached out to Salinas.

Update 3:21pm CT, Aug. 25: TikTok told the Daily Dot that it removed Salinas’s sound because it violated the app’s community guidelines, but declined to further comment.