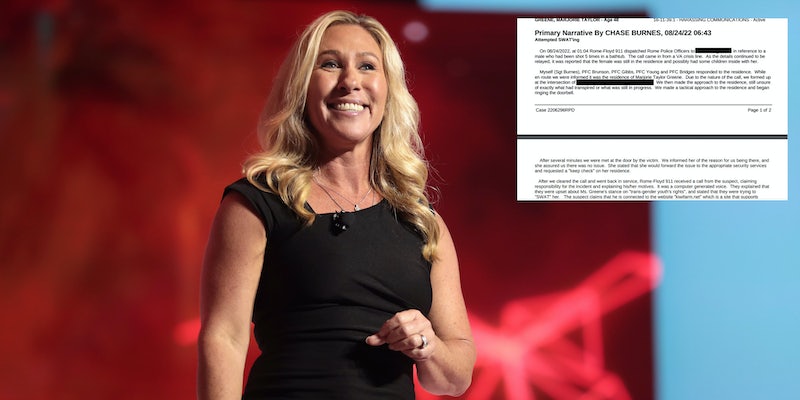 The caller allegedly blamed Greene's stance on transgender youth's rights for the attack.

A police report obtained by the Daily Dot reveals new details on the “swatting” attack against Rep. Marjorie Taylor Greene (R-Ga.) at her Georgia home.

In a tweet on Wednesday, Greene stated that law enforcement arrived at her residence early Wednesday after she was targeted. Swatting involves making a prank call to emergency services in an effort to have police respond aggressively to a target’s home.

“Last night, I was swatted just after 1 am,” Greene wrote. “I can’t express enough gratitude to my local law enforcement here in Rome, Floyd County. More details to come.”

A report on the incident from the Rome Police Department, obtained by the Daily Dot, notes that an unknown caller alleged that a male had been shot five times in a bathtub at Greene’s residence.

Responding officers say they learned that the home belonged to Greene while en route. After making a “tactical approach” to the home, police began ringing the doorbell before eventually being greeted by Greene. Greene said she was “sound asleep” when police knocked and that officers had their guns “ready.”

“We informed her of the reason for us being there, and she assured us there was no issue,” the report says. “She stated that she would forward the issue to the appropriate security services and requested a ‘keep check’ on her residence.”

After returning to the police station, officers say they received a call directly from the alleged perpetrator. In a computer-generated voice, the caller claimed they had targeted Greene over her stance on transgender youth’s rights.

The Daily Dot attempted to reach the phone number listed in the police report as belonging to the suspect but was met by an automated message. The suspect, as is often the case in swatting attacks, used an internet-based number as opposed to a cell phone or landline.

The caller claimed to be connected to Kiwi Farms, a notorious far-right site known for carrying out harassment campaigns. The suspect also provided police with a username from the site that they claimed belonged to them. The username belongs to an admin on the site known for doxxing, swatting, and anti-transgender posts, suggesting that the caller’s alleged motives and identity may have been fabricated.

Greene is listed on the police report as a victim of “harassing communications.” The incident remains under investigation.