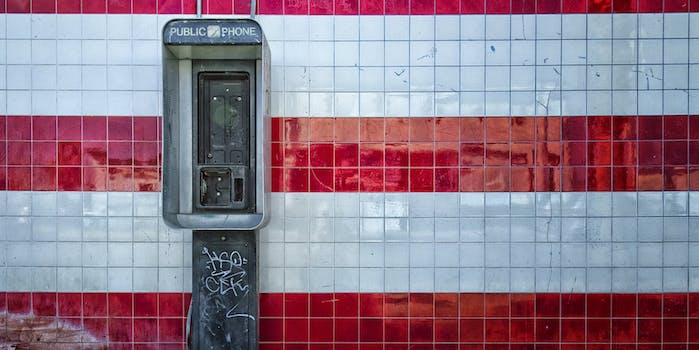 The idea of citywide Wi-Fi sounds intoxicating, but in execution, it may come with an unexpected cost.

If all goes well, New York City will be rolling out free citywide Wi-Fi starting in 2015, via a system known as Links. The payphones of the future, as it were, will offer not only wireless Internet but also free calls in the U.S., access to directions and city resources, and even charging ports for mobile devices. This will dramatically expand the city’s existing payphone Wi-Fi system, a service which (as of now) seems hopelessly outdated. This is, of course, assuming that the devices aren’t promptly trashed in the urban landscape, which, given that the city will need around 10,000 Links to meet its goal of citywide Wi-Fi, is no guarantee. Yet, everything must come at a price, and in the case of Links, that’s aggressive advertising.

In documentation supporting the project, the city claims that ad pre-sales will pay for construction and maintenance of the devices, while ongoing sales will generate approximately 500 million dollars over 12 years, thus ensuring that taxpayers won’t have to fund the project. That is a significant amount of money, and the city will likely need to work very closely with advertisers to achieve these goals; advertising for the project is going to be managed by Titan, a major digital advertising firm. That, in turn, may involve selling residents and visitors out, and in ways other than the obvious pollution of the landscape with ads.

The ad-supported system will use LCDs mounted on the outside of the installations, adding to the already existing cacophony of urban advertising. In New York, as in San Francisco, Tokyo, and other dense urban centers, it’s not just impossible to move without spotting ads; ads are growing increasingly aggressive. Some may long for the days of static billboards, the occasional poster, and buildings painted with colorful and now seemingly quaint advertising. By contrast, modern cities are filled with the bright light and glare of constantly shifting and evolving ads, in an industry that generates absurdly high revenues. Those glittering Times Square ads cost hundreds of thousands a month, depending on location and deal specifics. Links even involves residential ad placement, which will make it impossible to escape the barrage.

We also seem ever closer to some sort of dystopian future where we are not just bombarded by ads but actively stalked by them. Links may represent a new dawn of ad stalking, the moment when it crosses over from cyberspace into the real world, as Internet users are confronted with an environment where their linkage (so to speak) to city-sponsored ad-supported Wi-Fi networks exposes them to uniquely targeted advertising. Aside from the potential privacy violations embedded in such a vision of the future, it’s also rather disturbing, as when other more unsavory aspects of science fiction come to life.

It’s not as far-fetched as one might think. Though the current proposal states that advertisers will be buying time on the display as with conventional advertising (including existing LCD ad systems on billboards, bus stops, and other locations), that doesn’t necessarily mean the advertising needs to remain static; individual displays will be up to advertisers, and buyouts could potentially include firms that rotate ads, rather than specific companies buying ad space. Moreover, even an individual firm like Coca-Cola might adjust advertising to cover a range of its products depending on who is accessing a Link at a given time.

The very vagueness of the language surrounding the ad slots is worrying, as Links promises “insight-driven and intelligently programmed advertising & public service announcements.” Such promotional adspeak is difficult to decode but seems to suggest the use of user data to generate dynamic advertising. The New York Times suggests that we should put our concerns in check:

Officials also sought to pre-empt the privacy concerns. The city said it would ‘never share or sell any protected personal information’ collected on the network. But companies may use aggregate data, information extracted anonymously from a pool of users, to guide advertising.

“Never,” however, is a strong word, and it can come back to bite you. If companies are collecting aggregate data, that means they are collecting user data, and from there, it might not be too far a twist from the original terms of service or city contract to develop individually targeted advertising.

Users accessing Links could just as easily have their Web traffic traced, despite ostensible encryption, to create targeted advertising; ads could even hop from Link to Link over the existing network. Advertisers and firms like Google have invested heavily in the development of algorithms to create ideally tailored ads for users, including that which traces users across the Web for the purpose of collecting browser data and displaying custom ads. Such technology may be just as easy to apply to Links, depending on the nature of the privacy policies developed to support the technology—and the city will have a strong incentive to leave those open-ended, especially under pressure from advertising agencies and corporations.

In the most mild of scenarios, advertisers will want to collect information about demographics in order to learn more about who is using Links, how they’re using it, and how best to target them with advertising. Given the likely high cost of a spot on one of the terminals, it’s highly probable that advertisers will want to get their money’s worth on the proposition, which means creating clear documentation to ensure the most efficient possible use of the space. If users aren’t responding, it’s time to switch up an ad campaign to capture attention.

But it’s unlikely to stop there. If advertisers are gathering information about users, they may as well track data to display dynamic ads. The user who logs on to check her email and talk with a friend about Sprite may notice that the ad before her changes. And if she’s accessing the system through Wi-Fi on her phone to cut down on data charges and drain on her battery, the same ads will trail her through the city as new Links pick up her signal. She’ll be followed around in a world tailored to her browsing habits and her buying history, as numerous advertisers use cookies and other tracking tools to learn more about what consumers are buying, when, and how. While may not always be possible, and it won’t always be as simple as this, as when multiple users are accessing the same Link, that doesn’t mean that the system won’t develop user memory.

“The city acknowledged Monday that law enforcement agencies in an investigation could legally request data from the link operators, as well,” writes Emily Badger at the Washington Post, highlighting the other obvious problem. Without clear standards on how and when law enforcement could use data (and, given recent privacy violations of cellphone networks and Internet records, it’s a valid concern), Links users might have good reason to be nervous about their privacy.

The solution to potential privacy concerns, of course, would be to create robust privacy protections for users, like prohibiting advertisers from tracking users at all or at the very least restricting their use of user data. However, this would run contrary to the interests of advertisers, who might in turn attempt to undercut pricing schemes or negotiate better deals if the city attempted to push through better privacy protections. In that landscape, especially if it was accompanied by threats to yank ad deals, the city might feel backed into a corner; it needs the advertising revenues to support the system, so it may have to sell out users in order to secure that funding.

Already, the city warns that secured connections should be used for sensitive data, which is common best practices, but also a sobering reminder that no Internet connection is particularly safe. While the Links are ostensibly encrypted, that doesn’t provide a guarantee that the Links themselves, and their advertisers, will protect their users from the collection of data by their very owners.

For advertisers, the ability to buy ad space across New York and collect user data might prove impossibly seductive, as it would be a two birds with one stone situation. And that may just be why the city projects such high revenues; because it’s not just selling ad space, but also users. Are citizens willing to give up privacy for Wi-Fi?