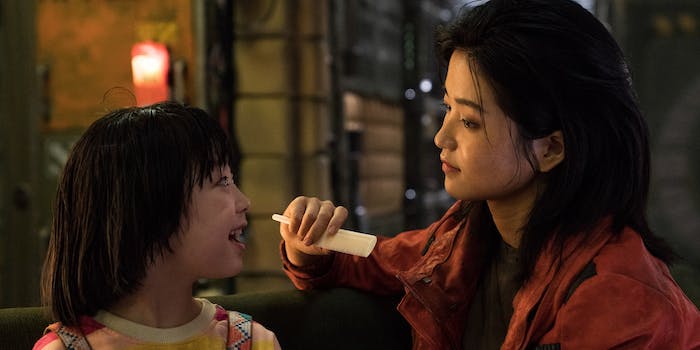 Netflix’s ‘Space Sweepers’ is the first good blockbuster of 2021

It's a cross between 'Cowboy Bebop' and 'Guardians of the Galaxy.'

With Hollywood studios delaying their hottest properties for months on end, it’s a long time since we saw a genuinely good blockbuster. Space Sweepers definitely fits the bill; a funny, high-octane action/adventure flick with a charismatic cast and a simple but relatable political message.

RELEASE DATE: Feb. 5, 2021
DIRECTOR: Jo Sung-hee
STREAMING: Netflix
With high-octane action sequences and a goofy sense of humor, this Korean sci-fi blockbuster feels like a cross between ‘Guardians and the Galaxy’ and ‘Cowboy Bebop,’ starring a ragtag crew of space junk collectors who have to take care of a missing kid.

Billed as the first Korean space blockbuster, Space Sweepers shares a lot of DNA with the beloved anime series Cowboy Bebop. The heroes are a ragtag crew of frenemies who live together on a messy spaceship, working in the sci-fi version of the gig economy: space trash collection. Not as glamorous as bounty hunting, but it pays the bills. Kind of. We meet them during an enticingly fun chase sequence that introduces the crew while tying into the film’s ecological themes. In the year 2092, Earth is in the midst of a climate apocalypse. Space trash and air pollution are serious problems that rich people avoid by living in a utopian space colony—a retrofuturistic bio-dome, designed by evil scientist James Sullivan (Richard Armitage, overacting to precisely the right degree).

The cynical Tae-ho (Song Joong-ki) is our protagonist, an ex-soldier who wants to earn enough cash to find his long-lost daughter’s remains. His boss, the badass Captain Jang (The Handmaiden star Kim Tae-ri), corners the market on looking extremely cool while piloting their ship. And former gangster Tiger Park (Jin Seon-kyu) is a tough guy with a heart of gold. Our fourth and final crewmember is the robot Bubs, a smartass who gets several entertaining action sequences involving a harpoon: she obviously doesn’t need to breathe, so she can stand on the outside of the ship and fling stuff around. She’s saving up cash for gender confirmation procedures, a detail that’s commendably well-drawn considering the dearth of trans representation in other mainstream blockbusters. Bubs is voiced by a man (Yoo Hae-jin), which is definitely a problematic detail, but in general, she’s presented on equal footing to her jaded and chaotic crewmates.

Following in the mold of Cowboy Bebop and Guardians of the Galaxy, the heroes of Space Sweepers start out as a team of squabbling assholes. At first, they’re only brought together by the prospect of a big payday: ransom money for a missing android girl named Dorothy (Park Ye-rin). After picking her up on a routine junk haul, they realize she’s incredibly valuable: an explosive killing machine who just looks like a 7-year-old kid. Naturally, they start planning an incompetent hostage exchange, but one by one, they begin to bond with her like an actual child. Dorothy, aka Kot-nim, is a charming foil to the greedy and disaster-prone crew.

It’s hardly groundbreaking stuff: an adventure movie about a squad of misfits whose hearts are melted by an adorable kid, teaming up to defeat a dastardly supervillain. But it’s fun to watch, and from a Western perspective, it’s interesting to see these familiar ideas play out from a different angle. Space Sweepers feels far more international than most Hollywood blockbusters, featuring a diverse supporting cast of characters speaking a variety of languages. Also, the heroes are working-class. Modern American action/adventure movies prefer to focus on rich people, superhumans, and the U.S. military, and when we do see some working-class characters, they’re often rooted in nostalgic Americana. Meanwhile, the main characters of Space Sweepers are relatably overworked, annoyed, and struggling with debt—and very aware of their place in a toxic capitalist hierarchy. Like Pacific Rim, this film’s politics don’t need to be subtle to be effective.

As always, none of this would work without great production design, which was clearly a priority for director Jo Sung-hee. The action sequences in Space Sweepers are sparkly, kinetic, and easy to follow—and the costumes and sets are a riot. The main spaceship has a wonderfully cluttered and lived-in feel, and there’s an appealing contrast between the scruffy, individualistic styles of the main characters versus Richard Armitage’s whitebread button-down shirts, and the glistening black armor of the evil footsoldiers. Basically, there’s always something fun to look at on-screen; an important strength when your film is 136 minutes long and, let’s face it, not enormously original.