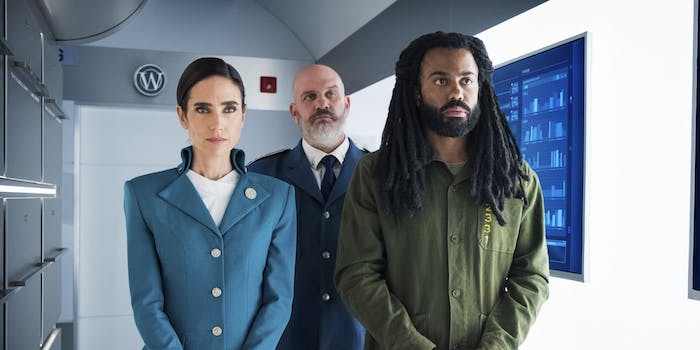 This adaptation is a watered-down insult to the movie.

If you wrote a satire about an American TV network trying to adapt Snowpiercer, you couldn’t do much better than this: A crime drama where the female lead solemnly implores the hero, “You’re the only homicide detective on the train!”

TNT’s Snowpiercer borrows heavily from the movie, itself a loose adaptation of the French graphic novel Le Transperceneige. All three versions are set in a post-apocalyptic future where the surviving humans live on a massive train, moving ceaselessly through a frozen wasteland. The passengers are divided by class, with some living in abject poverty while others thrive. That’s where the resemblance ends between the book and film, where director Bong Joon-ho invented a new story from scratch—a subversive and visually arresting thriller with a morbidly absurd sense of humor. He has a producer credit on the TV show, which is fortunate because otherwise, it would feel like outright theft.

Created by Josh Friedman (Terminator: Dark Fate) and replacement showrunner Graeme Manson (Orphan Black), the TV adaptation draws directly from the film’s production design, right down to the glutinous food blocks eaten by “tailies”—people who live in the overcrowded tail of the train. One of the conductors is a knockoff of Tilda Swinton’s character, featuring her fur coat and Yorkshire accent, but none of Swinton’s vibrant personality. Several set pieces are lifted straight from the movie, like tailies being punished by having their arms frozen off. So despite having a totally different plot and cast, TNT’s Snowpiercer manages to feel deeply unoriginal.

Daveed Diggs (Hamilton) stars as Andre Layton, a tailie who dreams of revolution. Like everyone else in the tail section, he broke onto the Snowpiercer train without a ticket, while the people in first, second and third class paid to escape the apocalypse. (First class live in opulent luxury, while the thirdies are working stiffs, maintaining the food supplies and engines.) Andre and his friend Josie (Katie McGuinness) plan to invade the upper carriages, breaking past a phalanx of fascistic prison guards. But they’re interrupted when Andre is recruited by the meticulously organized train manager Melanie Cavill (Jennifer Connelly), who wants him to solve a murder. He may be a tailie, but he’s her best chance of finding a killer who could upset the balance of power. Yes, Snowpiercer is officially a cop show, complete with the same generic crime TV music you hear on every procedural drama.

TNT’s Snowpiercer had a messy creative process, including a full rewrite and reshoot of the pilot. The original feature-length pilot was filmed in 2017 with director Scott Derrickson (Doctor Strange) and writer Josh Friedman, but Friedman then left due to creative differences, with new showrunner Graeme Manson handling the rewrites. Describing the original pilot script as “the best I’ve ever read,” and the new version as a “radically different vision,” Derrickson refused to direct the rewrite, and was replaced by British TV director James Hawes. We don’t know what those changes entailed, but judging by the initial casting announcements, half the cast are are now playing totally different characters from the roles they were hired to play.

Daveed Diggs’ character was originally described as a drug addict who spends most of his time with a cage of rats. Annalise Basso was cast as a “quiet and diligent” working-class girl, but now plays a spoiled brat. Alison Wright was cast as her mother, but now plays the Tilda Swinton knockoff role. The train’s archivist is now a nightclub owner. While the original cast did include police (including Andre’s investigation partner, played by Mickey Sumner), I suspect the rewrites involved retooling the story into a more conventional crime procedural format. It’s an absurd way to reframe Snowpiercer’s capitalist allegory, because it implicitly buys into the idea of a semi-functional justice system.

We’ve got jackbooted enforcers and a cartoonish Hunger Games divide between the aristocracy and the slums, but the depiction of state violence is uneven and, if anything, oddly tame. Like many dystopian dramas, Snowpiercer wants to tell a story about “inequality” and “revolution” using espionage and fight scenes (as opposed to, say, strike action), without offering a vision for the revolution’s ultimate goal. Certainly not communism, god forbid! Not to mention Andre’s backstory as a cop, which is carefully devoid of political context. A few scenes lean into the contrast between Andre (a Black man with dreadlocks, dressed in dirty secondhand clothes) and the glossy white passengers of the upper carriages. But the show generally avoids racial commentary, following the classic American TV idea of a “good cop” hero who metes out justice, opposing the bad cops who deliver the beatings.

If I wasn’t familiar with the source material, I’d rate Snowpiercer as a middling sci-fi drama with an intriguing concept but rather forgettable characters. The setting is unavoidably nonsensical, of course. Why escape an ice age on a moving train instead of a stationary settlement? Where does Snowpiercer’s fuel come from? Why are the train’s dimensions so unclear? Why don’t people discuss the obvious likelihood that their mysterious leader “Mr Wilford” doesn’t exist? None of these questions mattered in the movie, where the setting was purely allegorical. Like The Matrix, Bong Joon-ho’s vision worked because it was a stylized fantasy. The train represented the concept of capitalism. But while the TV remake uses similar costumes and set design, it lacks the surrealism required to suspend our disbelief. It’s also kind of weird to hear Daveed Digg’s voice deliver boilerplate cop dialogue if you associate him with the whip-smart lyrics of Hamilton or clipping, compounding the sense that we’re watching a second-rate version of something that ought to be good.

With its crime thriller plot and watered-down political commentary, this show works best if you didn’t watch or enjoy the original Snowpiercer. The worldbuilding includes some thoughtful new additions, exploring class warfare and scarcity in an accessible way. Each episode provides a decent balance of screentime between an extensive ensemble cast, making it easier to follow than the dull-yet-byzantine plotting of Altered Carbon. Basically, it’s a competent thriller that benefits from prestigious name recognition, but fails to stand out on its own.

In Bong Joon-ho’s Snowpiercer, an elaborate fantasy world illustrates the same class divides and tragicomic cruelties we saw in his Oscar-winning hit Parasite. The heroes struggle to survive in a hopelessly unfair society, eventually realizing that a change of leadership isn’t enough. The only moral solution is to destroy the entire system. Will TNT’s Snowpiercer manage this, with its law enforcement hero and its palpable lack of imagination? I think you can guess the answer.

Snowpiercer premieres on Sunday, May 17 at 8pm CT on TNT.