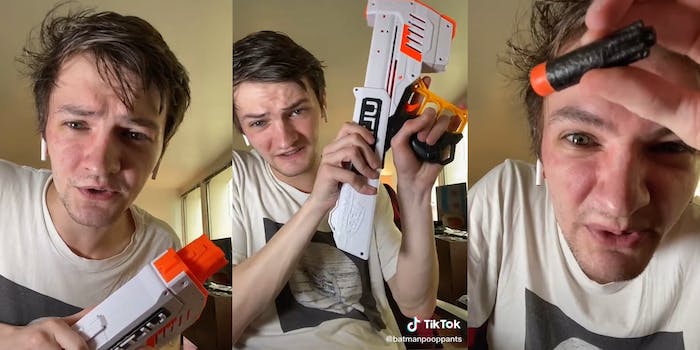 Nerf's arsenal scrutinized for its evolution.

Have you purchased a Nerf gun lately? Do they look a little different than when you were a kid? One TikToker recently pointed how how much more realistic the “toy” has become.

“Nerf guns are different now,” says TikToker batmanpooppants, in a video that now has more than 2 million views. “Something happened to Nerf guns.”

He points out that “old-school Nerf guns” would typically just “fart out” ammo, which was made of foam. But the modern Nerf gun has evolved, and not in a good way. The caption of the video reads: “I accidentally bought a riot control weapon.”

Many commenters agreed, or shared their own memories of getting blasted with one. “RIGHT LIKE THEY ARE ACTUALLY SCARY NOW… i got shot in the face with a MEGA one and i cannot tell you how bad it hurt,” said one. Another commenter mentioned that there’s a whole genre devoted to modifying Nerf guns to turn them into, say, an AR-15.

There were also quite a few people worried about his Danny DeVito pillow, which he shoots with the Nerf gun during a demo.

Over the last decade, as mass shootings have become more and more prevalent, Nerf guns have been scrutinized by concerned parents and anti-gun groups. While they are still classified as toys, Nerf products have become increasingly complex. Do kids really need a Nerf tactical vest?

It seems Hasbro is trying to capture Gen Z’s attention: In March, Nerf put out a job listing for a Chief TikTok Officer. That same month, police in North Carolina reportedly found real firearms in a man’s home disguised as Nerf guns during a drug search.