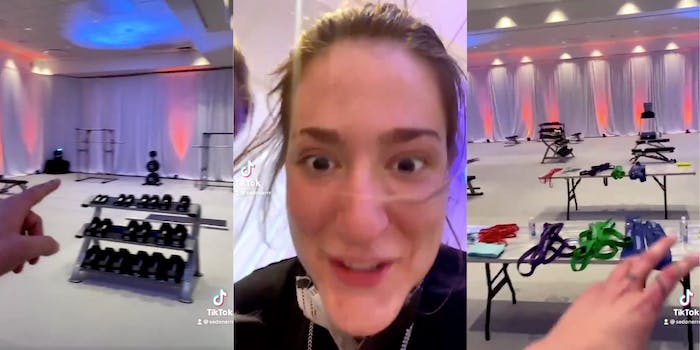 There’s been an update at the NCAA women’s tournament. Remember when Oregon Ducks forward Sedona Prince went viral for exposing the severe disparities between men’s and women’s facilities?

The public outcry led the NCAA to open up its purse strings and pony up for a well-deserved and immediate upgrade in equipment for the women’s tournament. Prince shared the news on her TikTok.

“Guess what, guys? We got a weight room!” she exclaims in the video. “Thank you, NCAA, for listening to us. We appreciate y’all, for real.”

“I want to be really clear,” NCAA President Mark Emmert said during an interview on Friday, following the NCAA’s apology to the women’s teams. “This is not something that should have happened and, should we ever conduct a tournament like this again, will ever happen again.”

However, it remains unclear why it happened in the first place, considering ordering identical facilities and equipment for men and women would have been pretty straightforward. Whatever the NCAA initially saved in equipment costs for the women, a relative drop in the bucket for the organization, was surely lost, likely tenfold, in goodwill.

For many, the sheer notion that the monied NCAA would put the female athletes in such a predicament is asinine and highly disrespectful. As many pointed out, the arguments for the women getting (or deserving) less because they aren’t as profit-bearing as the men remain paper-thin.

As Twitter user @RichDevall wrote: “Whether they bring in less money or not is a nonsense argument, they have a $50m a year TV deal for this tournament, last time I checked that is just about enough to set up a proper weight room without being shamed into it.”