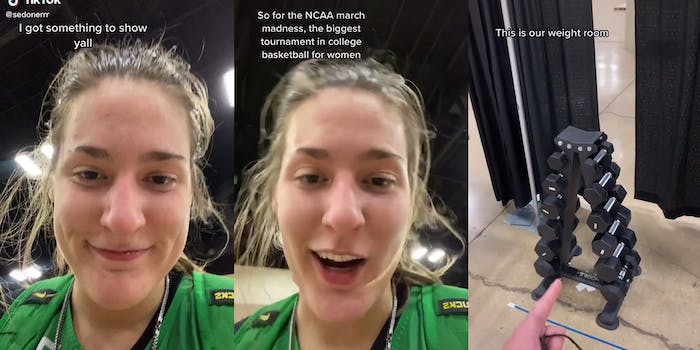 'If you aren’t upset about this problem, then you’re a part of it.'

An NCAA women’s basketball player exposed the stark difference between men’s and women’s weight rooms in a viral TikTok, calling B.S. on the suggestion that the lackluster women’s facilities were due to a lack of space.

Sedona Prince, a forward for the Oregon Ducks, uploaded her video last night. It had earned more than 450,000 views on TikTok and a whopping 7 million views on Twitter at the time of writing.

“So for the NCAA March Madness, the biggest tournament in college basketball for women, this is our weight room,” Prince says, pointing to a dinky rack of dumbbells.

“Let me show you the men’s weight room,” she says, panning across a huge room packed with squat racks, benches, dumbbells, and high-grade bumper plates.

“3 weeks in a bubble and no access to DBs > 30’s until the sweet 16?” Kershner wrote. “In a year defined by a fight for equality this is a chance to have a conversation and get better.”

“We acknowledge that some of the amenities teams would typically have access to have not been as available inside the controlled environment,” NCAA Vice President of Women’s Basketball Lynn Holzman said in a statement shortly after Kershner tweeted her criticisms. Holzman blamed this discrepancy on “limited space” and said the organization was “actively working to enhance existing resources at practice courts.”

But in her video, Prince balks at the notion that the women’s tiny weight room was due to “limited space.”

“If you aren’t upset about this problem, then you’re a part of it,” Prince concludes.

The NCAA’s discrepancy in amenities for men and women apparently doesn’t stop with workout equipment. Twitter user @nairacaceres shared a photo of a towel, hat, pair of socks, and other NCAA-branded supplies that the women’s teams received. Meanwhile, the men got an entire bed full of swag, including various shirts, hoodies, shampoos and body washes, koozies, and bottle openers.

“@ncaa so this is how you treat people that make your views possible??” @tmoneyyyyyyy wrote on TikTok.

Sports journalist and author Shea Serrano shared Prince’s video on Twitter with the caption, “this is wack as fuck.”