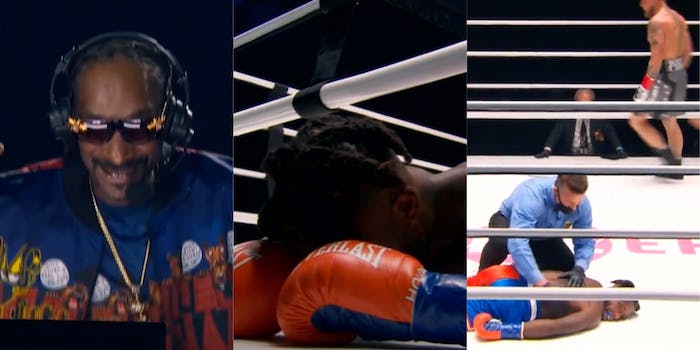 Twitter came for Robinson's soul as soon as it left his body.

Continuing to trend heavily into Sunday morning is the vicious knockout that former NBA journeyman Nate Robinson suffered at the hands of YouTuber-turned-boxer Jake Paul. However, it’s difficult to know where Robinson was hurt worse: Paul’s right hook or the treasure trove of memes that came after.

The fight took place Saturday night at Staples Center in Los Angeles, as the featured bout on the Mike Tyson-Roy Jones Jr. undercard. The two-time NBA slam dunk champion made his pro boxing debut against Paul, who only had one previous fight under his belt.

Robinson, fighting in New York Knicks colors, came out aggressive and looking the part of a fighter, to the point that commentator Snoop Dogg quipped: “Slow down, nephew! He got on basketball shoes.”

Paul (2-0, 2 KO) caught Robinson (0-1) with a right hand, knocking him down late in the first round. The referee allowed the former University of Washington star to continue. However, halfway into the sound round, Robinson got knocked down a second time, tagged with an overhand right to the ear.

Paul then laid down Robinson for good, knocking him out cold with a short right. Robinson’s limp body dove into the mat, as head bounced off the canvas in an ugly scene.

Paul was gracious in his win.

However, Robinson’s battle with social media had just begun. Like a grim reaper, Twitter came for Robinson’s soul as soon as it left his body. It was one of the platform’s greatest nights.

Among Us and Minecraft were even used in some of the memes.

And of course, as an NBA player, Robinson may never live the knock out down amongst his brethren. Golden State Warriors’ Stephen Curry dug up a tweet made by Robinson to Curry earlier in the night, in which Robinson proclaimed that he was “Gonna shock the world.”

“I see no lies,” Curry responded after the fight.

Watch the full Paul vs. Robinson fight below: