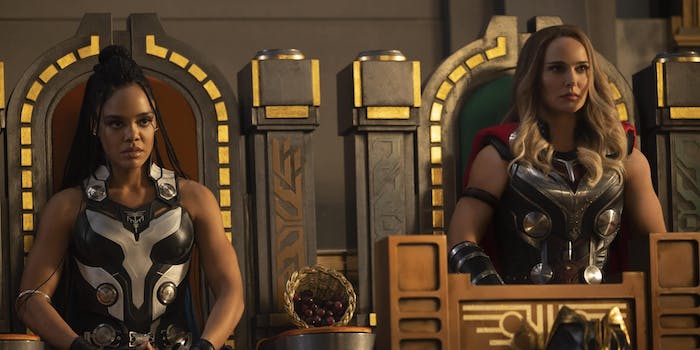 It's a conspiracy theory with some fairly obvious sexist undercurrents.

Considering the wider issues at play in Thor: Love and Thunder, Natalie Portman’s arms are a rather weird hill to die on. However, there’s a growing conspiracy theory that Marvel used CGI (computer-generated imagery) to bulk up Portman’s arm muscles, casting doubt on the publicity around her workout regimen to play Mighty Thor.

Portman’s physical transformation attracted attention long before the film came out, with fans celebrating her buff appearance in the trailers and paparazzi photos from the set. Honestly, this is now a standard part of the MCU promotional cycle for actors making their superhero debut.

But unlike with Chris Pratt or Kumail Nanjiani, some people simply refuse to believe that Portman put on real muscle for Thor: Love and Thunder—a conspiracy theory with some fairly obvious sexist undercurrents. The evidence? A behind-the-scenes video in which motion-capture dots are visible on her arms, suggesting that some VFX work was done on her body:

The idea of Natalie Portman having “CGI arms” spread quickly on Twitter and Reddit. However, it’s worth pointing out that a) Chris Hemsworth was also pictured with motion-capture dots while filming MCU films to give the VFX team the option of adding armor in post-production, and b) people’s muscles don’t always look the same from moment to moment.

The current Hollywood trend is for action stars to use extreme bodybuilder techniques, often working out on set to make sure they look perpetually shredded on-screen. In real life, people’s muscles look softer when they’re not actively flexing—something that’s more true for women. For instance, female pro wrestlers don’t necessarily look ripped in a casual setting. So it’s not surprising to see a contrast between Hemsworth (the quintessential bodybuilder action star) and Portman (a petite actress who temporarily bulked up for one film). According to interviews, Portman spent 10 months gradually building muscle with trainer Naomi Pendergast.

In the same video in which fans highlighted Portman’s motion-capture dots, she has visibly bigger arms than usual. The same goes for those paparazzi photos. This leaves us with two likely options. Either Portman is just flexing for the “hero shots” that got so much attention in the movie… or she put on some muscle, which was digitally enhanced in the same way that some movies use CGI to correct imperfections in actors’ skin.

These CGI accusations were shot down by the film’s producers, giving a different explanation for those motion-capture dots: Height. Portman is 5’3″, whereas the Mighty Thor is meant to be 6 feet tall. “The only thing we assisted with was making the Mighty Thor a little bit taller,” said MCU boss Kevin Feige in an interview with Total Film. “That was the only movie magic we used. Everything else was all her.”

This sentiment was echoed by producer Brad Winderbaum in a Wall Street Journal article about Portman’s workout routine, saying, “Natalie certainly put in the work and bulked up for the role, but there’s still nothing she could do to grow 9 inches.” It’s a perfectly reasonable explanation for those mo-cap dots—but considering the way conspiracy theories function, it’s unlikely to make much difference to people who are already certain that Portman’s muscles are fake.

The Daily Dot has reached out to Natalie Portman’s representatives for comment.